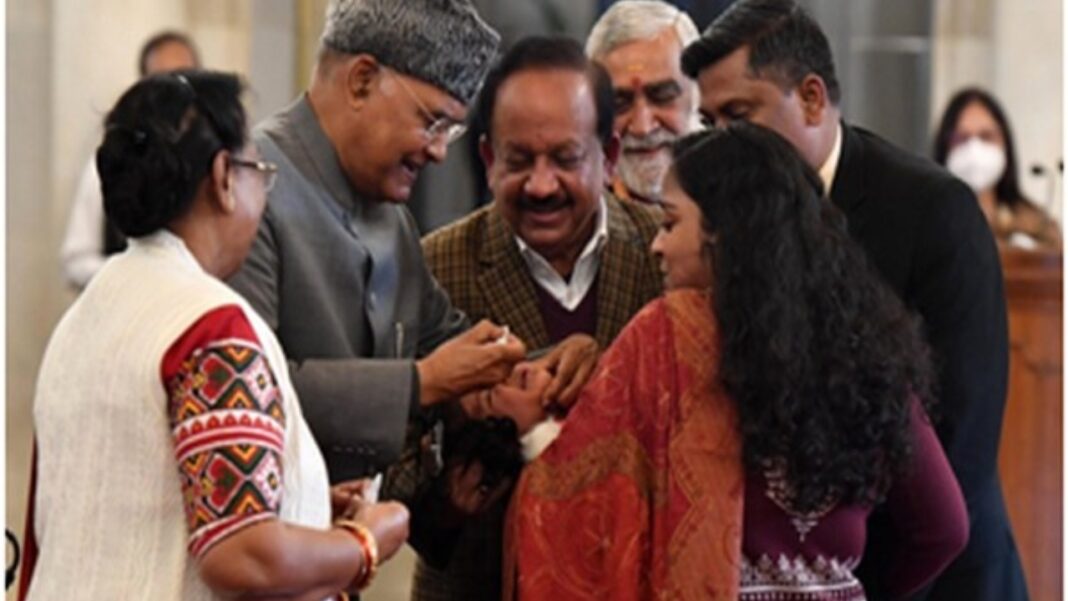 President Ramnath Kovind on Saturday launched the pulse polio programme for 2021. The event saw president himself administering polio drops to children below the age of five years at the Rashtrapati Bhawan.

On the eve of the Polio National Immunization Day, the President and First Lady Savita Kovind conducted an event wherein polio drops were administered to several kids ahead of the Polio Ravivar.

“Around 17 crore children of less than 5 years of age will be given polio drops as part of the drive of Government of India to sustain polio free status of the country. The countrywide drive will be supported by about 24 lakh volunteers, 1.5 lakh supervisors and many Civil Society Organisations (CSOs), WHO, UNICEF, Rotary etc,” the health ministry said in a statement.

“Healthcare workers will be visiting as many as 2 crore households to ensure that no child is left without the protection of the polio vaccine,” the statement said.

“While we are making efforts to protect our children from more and more diseases, it is important that all vaccines under the programme reach every last child of our country,” Mr Vardhan said.

“The lessons learnt from polio programme are being implemented to strengthen routine immunization by carrying out Mission Indradhanush, Gram Swaraj Abhiyan, Extended Gram Swaraj Abhiyan and Intensified Mission Indradhanush I and II — a drive toward 90 per cent full immunization coverage of India by year 2018 and to sustain it thereafter,” he said.

The health minister further said, “In order to close gaps that might have emerged during the COVID-19 pandemic, another phase of Intensified Mission Indradhanush (IMI 3.0) has been planned in 250 high risk districts of the country during February and March 2021. In addition to this, guidance for conduction of Sub-National Immunization days for polio and sensitive surveillance of vaccine preventable diseases during pandemic has also been issued to States.”