Support Us
More
More
HomeNATIONCase has been filed against 10 Pakistani security personnel after an Indian...
NATION
November 8, 2021 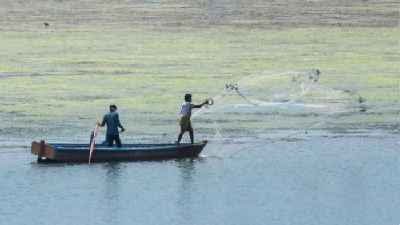 The Pakistani Maritime Security Agency has committed a cowardly act on the Gujarat coast. Pakistani Navy opened fire on Indian boat, in which one fisherman was killed. The incident is said to have occurred near the International Maritime Boundary Line in the Arabian Sea off the Gujarat coast on Saturday evening, which came to light on Sunday. Apart from the death of a fisherman in Pakistani Maritime Security Agency (PMSA) firing, one of the seven crew members on board the boat also suffered minor injuries.

According to a police officer, the incident happened around 4 pm on Saturday. Devbhoomi Dwarka Superintendent of Police Sunil Joshi said the fishermen, who were on board the fishing boat ‘Jalpari’, opened fire on other crew members by PMSA personnel on Saturday evening, killing one. The boat had left the Okha coast of Porbandar on 25 October.

The police officer said that the FIR is being registered by the Porbandar Navi Bandar police, which has jurisdiction over Gujarat over incidents happening beyond 12 nautical miles in the Arabian Sea. The incident is being investigated. The body of 32-year-old fisherman Sridhar Ramesh Chamre was brought to Okha port on Sunday. According to the information, the deceased fisherman was a resident of Vadrai, a coastal village in Palghar district of Maharashtra.

At the same time, sharing the incident in a statement, the Indian Coast Guard (ICG) said that at present the matter is being investigated by the police officers and the crew is being discussed jointly. Full details will be shared only after the investigation is completed. Pakistan, on the other hand, claimed in its statement that the boat had “illegally encroached” on Pakistani waters. Further, the PMSA said that the Indian boat had tried to warn, but when it did not pay heed, it opened fire.

As Pakistan and India do not have a clear maritime boundary in the Arabian Sea, fishermen from each other’s countries often face military action. Even before this, action has been taken by Pakistan like arrest of many Indian fishermen and confiscation of their boats.