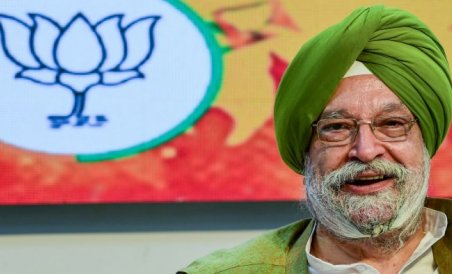 Union minister Hardeep Singh Puri said on Thursday that the Central Vista will be ready to host the next Republic Day parade in 2022. And added that it will be a ‘symbol of modern India’.

He said that the redevelopment of Central Vista Avenue, which runs from Rashtrapati Bhavan to India Gate, will take two and a half months to complete.

Puri also said that the Winter session of Parliament next year will take place in the new Parliament building.

“I would like to give you (PM) assurance that the redevelopment work of Central Vista Avenue will be completed in two-and-a-half months, where the Republic Day parade will be held (next year),” Puri said while speaking at the inauguration ceremony of two new multi-storey office complexes at Kasturba Gandhi Marg and Africa Avenue for over 7,000 employees of the Defence Ministry and the armed forces.

“I would like to give you (PM) assurance that the redevelopment work of Central Vista Avenue will be completed in two-and-a-half months, where the Republic Day parade will be held (next year),” Puri said.

Talking about the two new office complexes for the employees of the Defence Ministry, the minister said the construction work of these buildings has been completed in just 12 months.

The project has generated over 6.4 lakh person days’ of employment.

He said that light gauge steel framing (LGSF) technology has been used in constructing these two new office buildings.

“Under LGSF technology, there should be a minimum 24 months of time period for such buildings, but it has been reduced to 12 months,” he said, adding that 8,782 metric tonnes of steel and 7,920 metric tonnes of cement have been used in the construction work.

The redevelopment project of the Central Vista — the nation’s power corridor — envisages a new triangular Parliament building, a common central secretariat, revamping of the three-km-long Rajpath, from Rashtrapati Bhavan to India Gate, a new prime minister’s residence and PMO, and a new Vice President’s Enclave.

Central Vista is Prime Minister Narendra Modi’s dream project aimed at redeveloping the country’s administrative centre. The plan for the same was announced by the Ministry of Housing and Urban Affairs in September 2019. Though the project was halted for some after some people approached the Supreme Court against it, the court ruled in favour of the project on January 5. A new parliament building spread over 64,500 square metre area is also part of the redevelopment.

PM Modi had laid the foundation stone for a new triangular Parliament building on December 10. The new building will have a seating capacity of 900 to 1,200 MPs. The building is expected to be completed by August 2022 when the nation will be celebrating its 75th Independence Day.