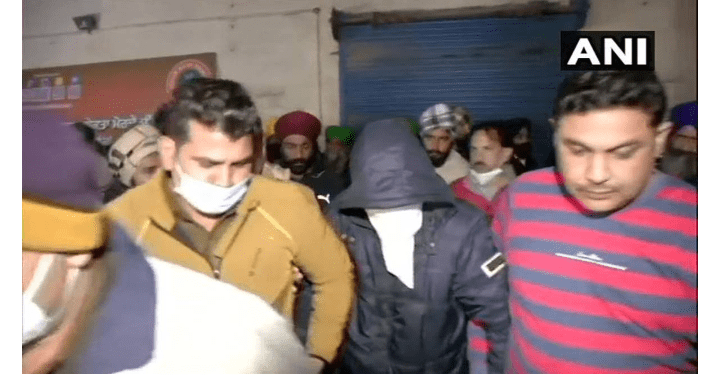 In a shocking revelation, farmer leaders during late night press conference presented a masked man who named police officials who have a plan to shoot farmers if things go out of control on January 26. Source, ANI

Protesting farmer leaders have alleged that a conspiracy has been hatched to kill four union leaders during the proposed tractor rally on January 26 to create disturbance and incite violence.

“Arms and ammunition was also dispatched with the intention to kill the farmers’ leaders,” they alleged.

The unnamed youth, who was produced by farmers before the media with his face covered, claimed that there was an alleged plot to shoot four farmer leaders. He was later handed over to the police.

“We have two teams. I am here since January 19. We were tasked to find out whether protesters were carrying arms,” the man said.

“For January 26, the plan was that our other team members will mingle with the protesters. And if the protesters approach with their parade, then we were asked to fire shots at them,” the man further claimed.

“During the agitation on January 26, the farmers will first be given a warning by the police and if they do not stop after that then the plan is to shoot them in their knee first. Then our team of 10 will shoot from behind to make it look like the farmers have resorted to using firearms in Delhi,” the man claimed.

BKU leader Jagjit Singh Dallewal said that the man caught by them initially tried to defame the morcha by alleging that protesters were involved in harassing a girl near the protest site. “When we grilled him, he admitted that he just created the ruckus to see if protesters were carrying any arms. Later, he revealed much more, Jagjit Singh Dalelwal said.

According to the youth, he was caught by the farmers when he, along with a girl, levelled false allegations of eve-teasing at the protest site at Delhi’s Singhu border.

The authorities”s negotiations with representatives of hundreds of protesting farmers hit a roadblock on Friday because the unions squarely rejected the Centre”s proposal to place three contentious legal guidelines on maintain, whereas the Agriculture Minister blamed exterior “forces” for his or her inflexible stand and mentioned no decision is feasible when the sanctity of agitation is misplaced.

The farmers continue to insist – as they have since their protests began 60 days ago – that all three laws be scrapped and that the centre provide legal guarantees for MSP (minimum support price).