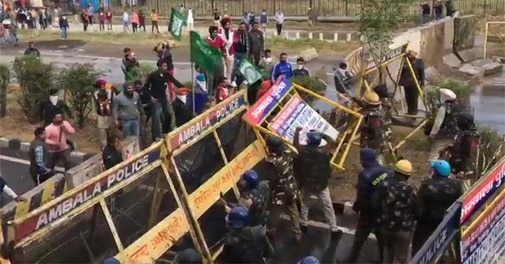 Today, the country is celebrating its 72nd Republic Day. Along with Delhi’s Rajpath, today everyone’s eyes are also on the borders of Delhi. Farmers who have been agitating against the agricultural law for the last two months, are taking out a tractor rally around the boundaries of Delhi today. After strict security and all the arrangements made, the Delhi Police has given its permission.

Farmers have broken barricades on the Ghazipur border. After this, the police have released tear gas shells. Along with this, lathicharge has been done on the farmers. In fact, before Akshardham, NH 24 was barricaded by the police, but some farmers’ groups tried to break some barricades with tractors and enter Delhi, when the police released tear gas shells and lathi-charged. The farmers have been chased from there.

Farmers on the Singhu, Tikri and Ghazipur border have broken barricades planted by the Delhi Police and entered Delhi. Some such views are being seen in Faridabad in Gurugram.

Earlier, farmers have cleaned and brightened the tractors for the parade. Tricolors and banners have been placed. Thousands of armed security personnel have been deployed at several borders in Rajpath and the national capital in view of the Republic Day celebrations and the proposed tractor parade of farmers.

The Union of Farmers Organizations, which is leading farmers on the borders of Delhi, is demanding the repeal of the new Central Agricultural Laws and the legal guarantee for the purchase of all crops at the Minimum Support Price (MSP) under the banner of United Kisan Morcha. Protesters have entered the Delhi border by removing barricades at the Singhu border and the Tiki border at the main demonstration site ahead of the scheduled event to take out the Kisan Republic parade on the designated routes in some parts of the city. A farmer leader said that youths are among those who have entered Delhi by removing the barricades and trying to convince them that discipline is followed during the parade.