Floral tribute paid to General Bipin Rawat and 12 other 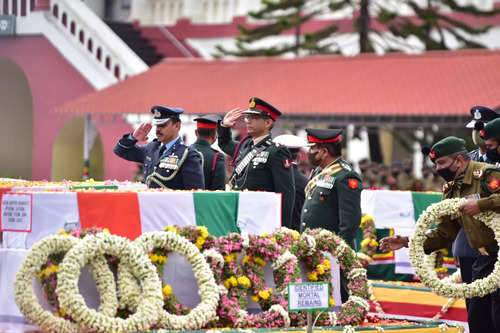 Senior Army officials, Chief Minister MK Stalin and other ministers laid wreaths and paid floral tributes to the mortal remains of the deceased person that includes CDS Bipin Rawat and 12 other at the Madras Regimental Centre at Wellington.

The mortal remains of the crash victims in caskets wrapped in the Indian tricolour were brought to the venue in decorated army trucks.

In Uttarakhand Assembly, Chief Minister Pushkar Singh Dhami, state ministers, and MLAs pay tribute to CDS General Bipin Rawat who along with his wife & 11 others died in a chopper crash in Tamil Nadu on Wednesday.

Names of those died in IAF chopper crash

The nine other armed forces personnel including the Air Force helicopter crew are:

The mortal remains of those killed in the military chopper crash on Wednesday were brought to Madras Regimental Centre today from Military Hospital, Wellington in Nilgiris district of Tamil Nadu.

Around noon, the bodies of the CDS and his wife will be taken to Sulur air base near Coimbatore in Tamil Nadu. From Sulur, their bodies will be flown to Delhi.

Around 4 pm, the bodies will arrive in Indian Air Force Palam Technical area in Delhi. From their the bodies will be directly take to CDS General Bipin Rawat’s residence at the national capital.