Support Us
More
More
HomeNATIONGeneral Bipin Rawat said: It is difficult to say what will happen...
NATION
September 15, 2021 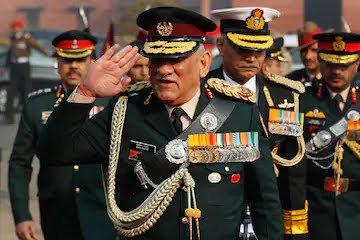 With the Taliban taking over Afghanistan, the difficulties for India have increased. The close proximity of Pakistan and China to the Taliban has made the situation more challenging for India. India and the Indian Army are fully alert about this.

CDS General Bipin Rawat said about this that the situation in Afghanistan is expected to worsen. Responding to the question whether China and Pakistan, which were successful in their strategy in Afghanistan, are now going aggressive on Indian borders, General Rawat said that only time will tell what will happen in Afghanistan. No one expected the Taliban to take over Afghanistan so soon. Things could get worse there.

Military sources said that the Taliban is also becoming a big problem for India because the Taliban have not only captured Afghanistan but now they also have a large number of state-of-the-art weapons and helicopters. The weapons of the US military in the hands of the Taliban can also cause great destruction. The Black Hawk used by the US Army and Navy is counted among the best helicopters in the world. US lawmaker Jim Banks has said – ‘There are now more than $ 85 billion in assets of US military equipment in the possession of the Taliban. These include 75 thousand vehicles, more than 200 airplanes and helicopters, 6 lakh small and light arm weapons. But that’s not all the Taliban have. They also have night vision goggles, medical equipment.