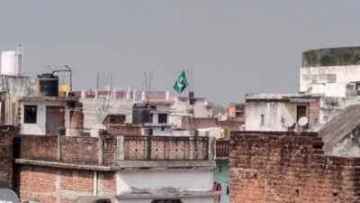 There has been a ruckus in UP’s Gorakhpur over the alleged hosting of Pakistan’s flag. The people of Hindutva organization reached the house of the particular community and pelted stones. During this, a vehicle was also damaged. On the information of the uproar, the police force of Chaurichaura and Jhaghan police stations reached the spot and brought the situation under control. SP North Manoj Awasthi told whether it is Islamic or Pakistan will be investigated.

Along with this, the records of the accused will also be searched. Strict action will be taken against those who are accused of spoiling the atmosphere in the district.
Pakistan flag was allegedly hosted at the house of a man named Taleem in Ward No 10 of Mundera Bazar town of Chaurichaura police station.

When the Chaurichaura police reached the spot after the photo went viral, no flag was found in the house. The house was locked from inside. Meanwhile, the mob present on the spot vandalized the car parked at Pappu Qureshi’s door. On the spot, SP North Manoj Kumar Awasthi pacified the atmosphere by assuring the people of the Hindu organization that were creating ruckus.

On the complaint of Kalyan Pandey, national president of Hindu organization Brahmin Jan Kalyan Samiti, the police have registered a case of sedition against four named accused, Taleem, Pappu, Aashiq and Arif. SP North said that in fact the police reached the spot on the information of the uproar, along with making peace, the police took the so-called flag, the root of the dispute, in its possession.