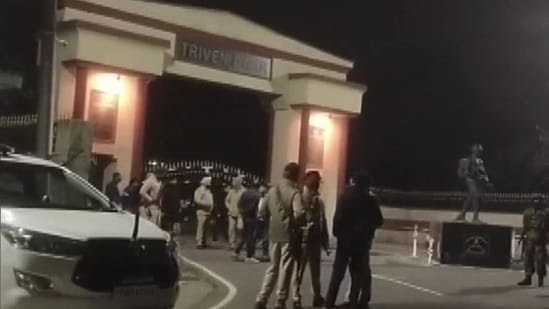 A grenade blast was reported near the Army camp in Pathankot in the wee hours of Monday. The police force was rushed to the spot and they are checking the CCTV footage, informed the Pathankot SSP.

“A grenade blast took place near Triveni Gate of an Army camp in Pathankot. Further investigation is underway. CCTVs footage will be probed,” Pathankot SSP Surendra Lamba was quoted as saying by news agency ANI.

An alert has been sounded in the area after the blast.

Local police officials recovered parts of the grenade from the site. While the investigation is underway, police have not divulged further information regarding the incident.

No injuries have been reported in the explosion.

In January 2016, the Indian Air Force’s Pathankot Air Force base was attacked by heavily armed terrorists in which two security forces personnel died in the initial fight and another succumbed to injuries hours later.

The terrorists, who were dressed in the uniforms of the Indian Army, had entered India through the Kathua-Gurdaspur border in Punjab. The attack started on January 2, 2016, and continued for three days. However, the terrorists were later neutralised by the National Security Guards (NSG).

The attack, which was reportedly carried out by Jaish-e-Mohammed (JeM), had heightened the tensions between India and Pakistan. “Pakistan is our neighbouring country. We want good relations with not just Pakistan but with all our neighbours. We also want peace, but if there is any terror attack on India, we will give a befitting reply,” Rajnath Singh, who was the Union Home Minister then, had said.