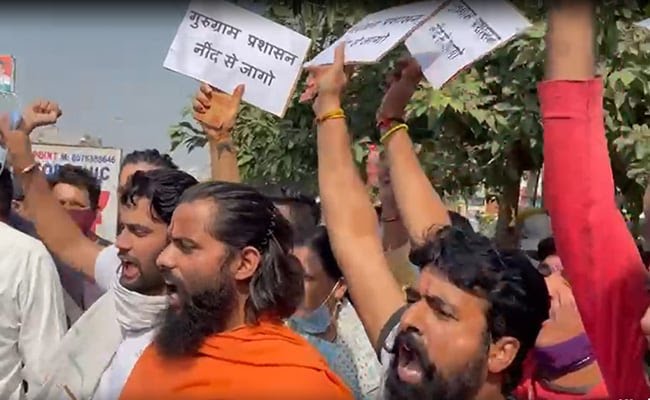 In Gurugram, Haryana, adjoining Delhi, the controversy over open prayer on Friday (Protest against namaz at public place) is getting deeper. Although the police has given permission to offer prayers at 37 places on Friday, but some Hindu organizations are trying to spoil the atmosphere during the prayers for the last five weeks. Today, as soon as it is time for Friday prayers, members of the Hindu organization reached the place of prayer and started raising slogans. A total of 30 people have been detained by the police.

It is worth noting that earlier last week on Friday, there was a tense situation when Muslims, who were offering prayers at a private property in Sector 12-A of Gurugram itself, were attacked by a mob, which allegedly included Bajrang Dal workers. The crowd raised slogans of ‘Jai Shri Ram’. Visuals from last week’s incident show a large number of police (including members of the Rapid Action Force) preparing for prayers for the Muslim community. In the video, dozens of police personnel can be seen standing behind a yellow barricade. They are stopping the protesting crowd which is shouting ‘Jai Shri Ram’.

Local lawyer Kulbhushan Bhardwaj was also among those who opposed the prayers in Sector 12-A last week, who had an argument with the policemen. Former BJP leader Bhardwaj had represented the Jamia Millia shooter who was arrested by Gurgaon Police for making a communal speech. The crowd dispersed only after being assured by the police. Such protests have been taking place in Haryana’s Sector 47 for the past few weeks, with people in the area claiming that anti-social elements or Rohingya refugees use ‘prayers’ with the intention of committing crimes in the area. The news agency ANI had last week quoted ACP Aman Yadav as saying that several rounds of talks have been held among the residents in this matter but no solution has been found so far.