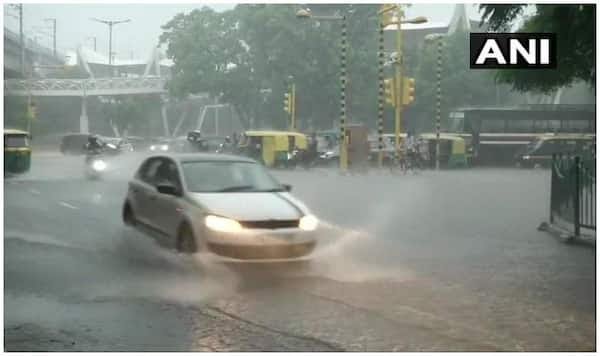 There is a possibility of rain in Delhi-NCR region on Thursday. With the onset of morning, it may rain at this time. During this, rain can be seen in the areas of Delhi NCR as well as the weather will remain pleasant. At the same time, there is a possibility of rain in many states of the country. According to the Meteorological Department, during this time the wind will blow at a speed of 30-40 km per hour in Delhi and there will be heavy rain.

Due to rain, the temperature of Delhi NCR can also see a drop. Let us tell you that this time the rain has been the highest in comparison to the last 46 years. This much rain was recorded in the year 1975. According to the Meteorological Department, there is a possibility of rain for the next few days. At the same time, people have to face a lot of problems due to waterlogging this time.

The Meteorological Department has issued an orange alert regarding moderate rain in the city on Thursday. There may be heavy rain at some places. During this time there is a possibility of waterlogging on the roads, filling of drains and power supply. For the last 2 days, the capital Delhi is getting rain.

At the same time, the minimum temperature in the national capital was recorded at 25.2 degrees Celsius on Wednesday. Strong winds are expected during the day and the maximum temperature is expected to be around 34 degree Celsius. Delhi has so far received 1,146.4 mm of rain in this monsoon season, the highest in 46 years and almost double of last year’s rainfall. The Safdarjung Observatory reported that in 1975 there was 1,150 mm of rain during the monsoon season. Generally, 653.6 mm of rain is recorded in Delhi during monsoon. The city normally receives 607.7 mm of rain between June 1 and September 14, when the monsoon begins. From Monsoon to Tuesday, Delhi received 390 mm of rain this month, the highest in September in 77 years