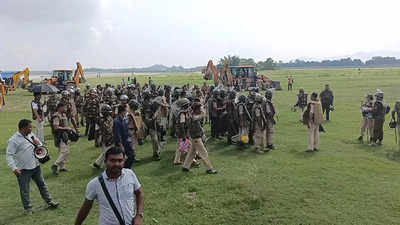 Two protesters were killed and many other including few police personnel were injured during clashes between local people at Dholpul Gorukhuti area in Assam’s Darrang district on Thursday.

“So far, I have received information that two protesters injured in police firing and they were rushed to hospital. Update will come. 9 Police personnel were also injured,” Darrang district Superintendent of Police (SP) Sushanta Biswa Sarma said.

Condemning police firing on Dholpur residents, Congress leader Rahul Gandhi tweeted, “Assam is on state-sponsored fire. I stand in solidarity with our brothers and sisters in the state- no children of India deserve this.”

“The Supreme Court had also given a directive against eviction during pandemic situation yet the Assam government led by CM Dr Himanta Biswa Sarma has remained adamant behaving in an autocratic manner to evict the residents of Dholpur who have been living in the area since the 1970’s,” he said.

“The people in the area have been subjected to harassment repeatedly by the BJP government since they came to power in 2016. Without alternative arrangements for land and housing where will these poor people go and how will they survive? They are mostly cultivators and their source of sustenance is being attacked. A government’s job is to work for welfare of people and not create problems for people by making them homeless without food, shelter , education which are basic human rights,” Bhupen Kumar Borah said.

“We demand that CM should first rehabilitate the people and not evict them forcefully. It is becoming very clear that the BJP government only knows how to govern through the might of the bullet as seen in fake encounters and now in open firing on people. Such type of governance is highly condemnable and is dangerous for a democratic society,” Bhupen Borah added.

Chief Minister Himanta Biswa announced the project on June 8 and just a day after first eviction drive was carried out by district administration.