Support Us
More
More
HomeNATIONIndia is one of the countries with the most inequality, the top...
NATION
December 8, 2021

India is one of the countries with the most inequality, the top 10% have 57 percent of the income 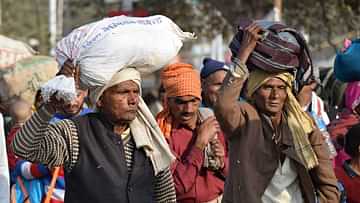 India has joined the list of poor and highly unequal countries, where one per cent of the population has 22 per cent of the national income in 2021 while the lower strata have 13 per cent. It has been said in a report. The report titled ‘World Inequality Report 2022’ is authored by Lucas Chancel who is the co-director of the ‘World Inequality Lab’.

Many experts, including French economist Thomas Piketty, have contributed to the preparation of this report. The report said that India has now joined the list of countries with the most inequality in the world.

The report said, ‘India is a poor and highly unequal country full of elite people.’ The report also said that gender inequality in India is very high. It states, ‘The income share of women labor is 18 percent. This is lower than the average for Asia (21 percent, excluding China).

Also Read – Honda launches Activa 125 premium scooter in India, know how much is the price

According to a report, Kerala retained its position as the top state with 75 points, while Himachal Pradesh and Tamil Nadu were ranked second with 74 points. Bihar, Jharkhand and Assam are the worst performing states in this year’s index.

NITI Aayog Vice Chairman Rajiv Kumar released the third edition of India SDG Index. Among the Union Territories, Chandigarh topped the list with 79 points, followed by Delhi with 68 points. Mizoram, Haryana and Uttarakhand were at the forefront in improving their scores in the year 2020-21. Their figures improved by 12, 10 and eight points respectively.

While 10 states/UTs were included in the category of leading states and union territories with a score of 65 to 99 in 2019, this time 12 more states/UTs made it to it. Uttarakhand, Gujarat, Maharashtra, Mizoram, Punjab, Haryana, Tripura, Delhi, Lakshadweep, Andaman and Nicobar Islands, Jammu and Kashmir and Ladakh have been ranked leading states with scores in the range of 65 to 99 points.