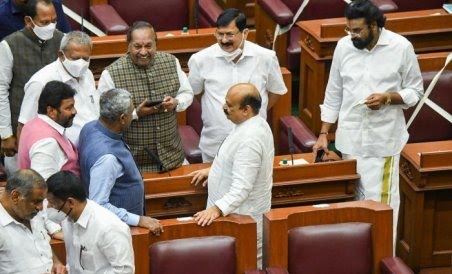 Facing stiff opposition from the Congress and the Janata Dal (Secular), the ruling BJP in Karnataka today took up for discussion The Karnataka Right to Freedom of Religion Bill, 2021, commonly referred to as the anti-conversion Bill. The assembly passed the bill by voice vote amid loud opposition.

J. C. Madhu Swamy, Minister for Law in the state, denies allegations that the government’s intent with the contentious new bill was to victimise the Christian community. The minister claimed the bill was brought in to protect all religions from illegal conversions, and also suggested that the state has data to support its claims.

During discussion on the bill, the Opposition Congress seemed to be on a back foot with the Basavaraj Bommai-led government claiming the legislation had been initiated by the grand old party with Siddaramaiah in the chief minister’s chair. The ruling camp also placed documents to support its claim before the House.

While Siddaramaiah, the leader of Opposition in the Assembly, initially refuted the charge, he later went through the records in the speaker’s office, following which he accepted that as the CM he had only asked a draft bill in this regard to be placed before the cabinet and that no decision was taken on the same.

Also Read: ITR Filing: Disadvantages of filing tax return late, know why tax should be filed before the deadline

A counter came at the fag end of the debate when Siddaramaiah flashed a November 2009 petition signed by some “BJP-RSS” personalities to the then CM B S Yediyurappa seeking an anti-conversion law.

“I won’t dispute the documents. It’s true I signed the file. But, it was this [2009] petition that was sent to the Law Commission. It’s an RSS agenda,” Siddaramaiah said. “The Bill drafted in 2016 is a world apart from the one you’ve brought.”

Chief Minister Basavaraj Bommai asked Siddaramaiah why the Congress acted upon an RSS petition. “If it was an RSS demand – the RSS is open about its stand against religious conversion – why didn’t you stop the drafting process? You wanted to go ahead because the then Virbhadra Singh government in Himachal Pradesh brought the law in 2016,” he said.