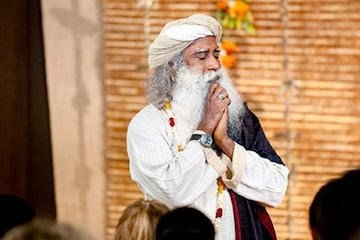 Sadhguru Jaggi Vasudev, the founder of Isha Foundation, has opposed the ban on bursting of firecrackers on the occasion of Diwali 2021. Sadhguru has also given a simple formula to reduce air pollution caused by bursting of crackers. Sadhguru said on Twitter, “The concern of air pollution is not a reason to deprive children of the joy of bursting crackers. If you want to do something for them, then walk to your office for three days. Let the children enjoy the firecrackers.”

On the other hand, Sadhguru wished everyone on the occasion of Diwali and said that this Diwali illuminate your humanity with full glory.

Sadhguru said, “In times of crisis, which can throw you into darkness, it is important to shine with joy, love and consciousness. This Diwali, expose your humanity in all its glory, Love and blessings.”

Earlier on Monday, a special bench of the Supreme Court said that a complete ban on firecrackers is not possible and the court had termed the Kolkata High Court’s decision on complete ban as “draconian”. The bench had said that steps should be taken to prevent the use of harmful chemicals in firecrackers.

Two out of every three families have no plans to burst crackers this Diwali due to various reasons, including increasing pollution and non-availability of crackers in the market due to restrictions imposed by the government. This has been concluded in a survey conducted by a community social media platform. The survey conducted by Local Circles revealed that around 42 per cent households are in favor of some kind of ban on bursting of crackers on Diwali, while 53 per cent households said they do not support any ban.

Apart from this, there are other people who are facing financial crisis due to loss of their livelihood, whose number is around two to three per cent.