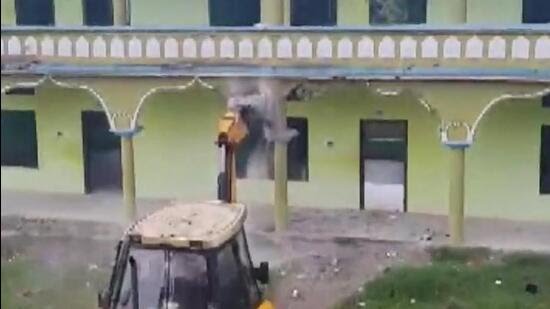 The Assam government today ordered the demolition of Markazul Ma-Arif Quariayana Madrassa in Bongaigaon district after Hafizur Rehman, one of the teachers at the institution, was arrested last week over his links with the AQIS sleeper cell modules in the state.

He was brought to the madrassa yesterday for further investigations. The madrassa had 224 resident students, who were moved out of the facility last night to pave the way for its demolition. According to government sources, these students will be accommodated at other institutions.

This was the third private madrasa to be razed this month for alleged jihadi links. Speaking over the big crackdown, Chief Minister Himanta Biswa Sarma said that he doesn’t want to generalise, but whoever has been arrested till date have had some connection with madrasas or were acting as preachers in some mosques.

SP Swapnaneel Deka told ANI, “District administration said in an order that the Madrasa is structurally vulnerable and unsafe for human habitation as the Madrasa buildings were not built as per APWD specifications/IS norms.”

“Yesterday, Goalpara district police had also conducted a search operation along with an arrested person linked with AQIS/ABT in the Madrasa. As per direction of the district administration, we have started the process to demolish the Madrasa,” SP Swapnaneel Deka said.