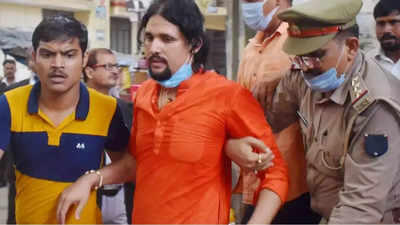 New Delhi: Central Bureau of Investigation (CBI) has filed a charge sheet against accused Anand Giri and others in the Mahant Narendra Giri death case on Saturday, ANI reported.

Mahant Narendra Giri, who was the president of the largest organization of saints in India, was found dead under mysterious circumstances at Baghambari Math in Prayagraj on September 20. Even as a suicide note was recovered from the site of the incident, some have objected foul play in the case. In the suicide note name of the seer’s disciples, Anand Giri, and two others were mentioned.

Earlier in November, Prayagraj District Court had also rejected the bail application of Anand Giri, who is accused of abetting Mahant Narendra Giri to commit suicide.

Anand Giri has been lodged in Naini Central Jail in Prayagraj since September 22.

Prime Minister Modi, UP Chief Minister Yogi Adityanath, Samajwadi Party chief Akhilesh Yadav and other political leaders were among those to tweet their condolences for Narendra Giri’s death.