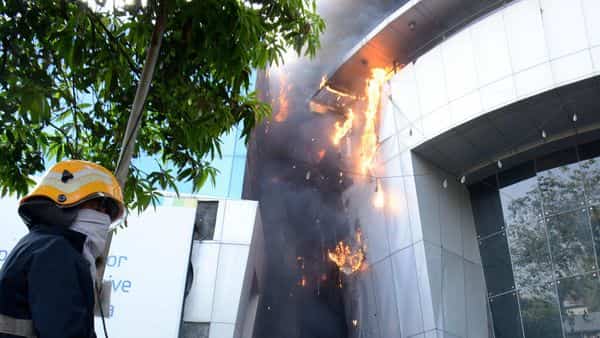 Maharashtra Sunrise Hospital :
A heavy fire has been started since 12 o’clock in the night. So far 10 people have died in this fire and many people are injured. On Friday afternoon, CM Uddhav Thackeray also reached the spot and took stock of the entire case.

Talking to CM journalists said that structural audit of Covid Hospital is necessary. This fire is not in the hospital, but it was in the shops of the lower floor and from there it spread to the top. The hospital also did not have adequate means for fire fighting. In this case, the guilty will be punished severely. Compensation of Rs 5-5 lakh has been announced for the families of the deceased. On the other hand, PM Modi has expressed grief over the death of 10 people in this case.

On getting information about the fire, the Municipal Corporation, the Deputy Commissioner Municipal Commissioner, Disaster Management Officer of BMC reached the spot. DCP Prashant Kadam reported that patients are being shifted to Mulund Jumbo Center and Fortis Hospital.

The hospital had said in a statement earlier, “A fire broke out on the first floor of Dreams Mall, Bhandup and smoke reached the Sunrise Hospital on the top floor. When the fire alarm sounded, all the patients were safely evacuated, as the smoke was reaching the hospital. It says, “Two bodies were also taken out. Other patients were sent to nearby Covid-19 centers and private hospitals. ”

The hospital said in a statement that the hospital started last year under exceptional circumstances of the pandemic and helped save many lives. This hospital is running following all other rules including the license received from the fire department, nursing home license .