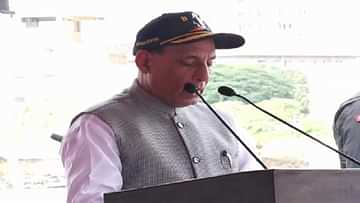 The indigenously built ‘Stealth Guided Missile Destroyer Visakhapatnam’ (INS Visakhapatnam) equipped with missiles and anti-submarine rockets joined the Indian Navy fleet on Sunday. It was handed over to the Navy by the country’s Defense Minister Rajnath Singh by participating in the commissioning ceremony at Mumbai Dockyard. During this, he said that today it is a pleasure to come to the commissioning organized by the Indian Navy. In the defense sector, we are moving towards self-reliance. This warship is equipped with the latest technology. The systems used in this will not only meet the needs of today but also of the future. It is 100% indigenous in terms of design.

Singh said that it is a matter of concern that the definition of UNCLOS is being continuously diluted by some countries by giving it arbitrary interpretation. He said that some irresponsible countries with their hegemonic and narrowly biased interests are misinterpreting international law.

The Defense Minister said, ‘I was told that this 163 meter long ship is a technology upgrade of the powerful Kolkata class destroyer and it is equipped with state-of-the-art technologies. With state-of-the-art sensor packages and weapons, it will be one of the most technologically advanced guided missile destroyers in the world. The system features used in it are going to meet the needs of not only today but also the future. Its commissioning reminds us of the maritime power, shipbuilding prowess and glorious history of our ancient and medieval India.’

Also Read – Bank Holidays: Bank will be closed for 5 days next week, check the list of holidays before going to the branch

He said, ‘I was told that this Lethal Worship, developed by MDSL, is 75% in terms of content, and completely indigenous in terms of design. Our ‘self-reliance’ in the field of shipbuilding, was once a major reason for our recognition all over the world. Today, when ‘INS Visakhapatnam’ manufactured by MDSL is being successfully commissioned, there is no doubt that in the times to come, we will be shipbuilding not only for our own needs, but also for the needs of the world. ‘

The SAGAR (Security and Growth for All in the Region) vision envisaged by Hon’ble Prime Minister with the spirit of friendship, openness, dialogue and co-existence with our neighbours, is at the core of our sense of duty, he said. Which you guys are discharging very well. Reports suggest that in the next one or two years, ie by 2023, the spending on security around the world is going to reach 2.1 trillion UA. Today we have full opportunity to make full use of our capabilities and move forward towards making the country an indigenous shipbuilding hub.