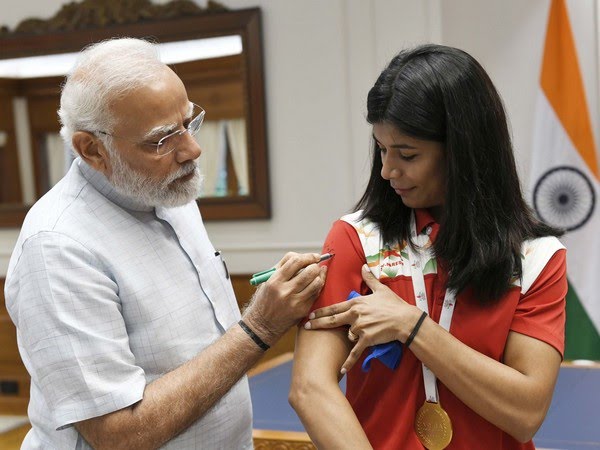 Manisha Moun and Parveen Hooda, both debutants, won bronze medals in the 57kg and 63kg weight classes, respectively. Before her, Mary Kom was the last Indian boxer who had won the championship in 2018.

Nikhat said in a tweet later that it was an honour to meet the Prime Minister.

“An honour to meet our Hon’ble PM @narendramodi sir. Thank you sir,” she said.

“An absolute honour meeting our Hon’ble Prime Minister Shri @narendramodi ji. Thank you for your wishes and support,” Moun wrote as she shared a picture with the Prime Minister.

Manisha (57kg) and Parveen (63kg) won bronze medals and the Indian contingent concluded its campaign with three medals at the world’s biggest boxing event, which witnessed exciting competition between 310 boxers from 73 countries.

The boxing event this year also marked the 20th anniversary of the Women’s World Championships.
Out of 12 Indian boxers, eight made it to the quarter-finals in this year’s tournament–the joint highest alongside Turkey.

With the addition of three medals in Istanbul, India’s overall medal tally in Women’s World Boxing Championships has gone up to 39 which includes 0 gold, eight silver and 21 bronze. This is third highest after Russia (60) and China (50).

PM Modi had earlier posted a tweet on social media congratulating the medalists for representing India well on the international stage.