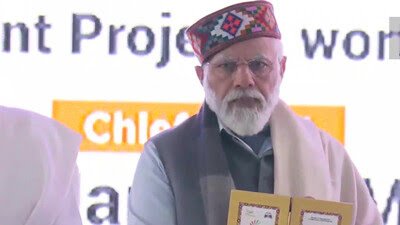 Prime Minister Narendra Modi on Monday inaugurated and laid the foundation stones for multiple development projects worth ₹11,000 crore in the Mandi district on Monday.

Projects that were inaugurated include the 111 MW Sawra-Kuddu Hydro Power Project, which has been built at a cost of around ₹2,080 crore. It will lead to the generation of over 380 million units of electricity per year and help the state earn revenue worth over ₹120 crore annually, officials have said.

One project that has been lying pending for around three decades will prove to be beneficial for Delhi, which will be able to receive around 500 million cubic metre water supply per year.

State Chief Minister Jairam Thakur welcomed the Prime Minister by offering a Himachali cap and a shawl. A traditional artifact of Chamba made on silver was presented to Modi, who was accompanying his Cabinet minister Anurag Thakur, who belongs to the state.

Amidst recitation of Sanskrit ‘shlokas’, the events also marked the completion of the four years of the BJP government.

An official statement said the Prime Minister has constantly focussed on fully utilising the untapped potential of the resources available in the country and one of the steps in this regard has been to utilise optimally the hydropower potential in the Himalayan region.

Also Read: FIR has been filed against Kalicharan Maharaj for using derogatory words against Mahatma Gandhi