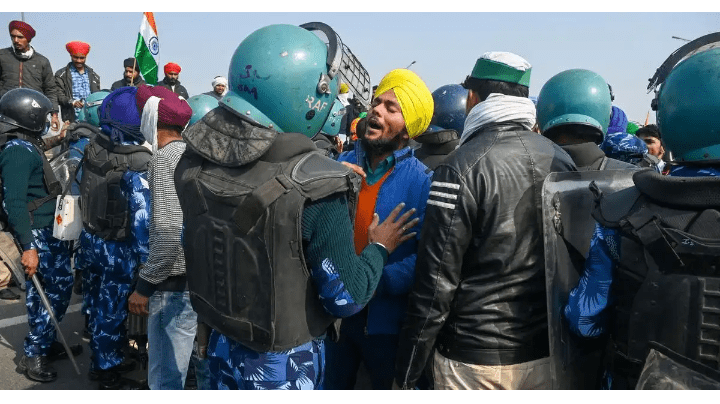 As many as 84 people have been arrested and 38 FIRs registered so far in connection with the violence that broke out during the farmers’ tractor rally on Republic Day, the Delhi police said.

Nine of these 22 FIRs were transferred to the crime branch of the Delhi Police for investigation.

Earlier in the day, the Delhi Police conducted raids at various locations in Punjab’s Jalandhar in connection with vandalism at the Red Fort during the tractor rally in protest against the three controversial farm laws.

On Friday, the Delhi Police had issued an appeal in leading newspapers asking people to share any evidence or information about the violence.

Acting upon the information that two persons identified as Jugraj Singh and Navpreet Singh of Tarn Taran had hoisted the Nishan Sahib from the ramparts of the Red Fort.

Meanwhile, Rajasthan Chief Minister Ashok Gehlot asked why a judicial inquiry was not being conducted into the incident, reported ANI. “Those [farmers] who were protesting peacefully for around 70 days can’t do something like this,” he claimed. “Impartial probe must be done.”

Gehlot also condemned Tuesday’s violence and said that some “anti-social elements” caused the Red Fort incident, where protestors stormed the historical structure and hoisted flags atop one of the minarets.

“A team from the National Forensic Sciences University has been called to analyse the videos,” said Joint commissioner (Crime) BK Singh.

Singh also said that Delhi Police were examining dump data of mobile calls from the areas where violence took place. This will help police identify the protesters where violent incidents were reported. He added that the registration numbers of tractors and other private vehicles that entered Delhi, particularly at Red Fort, have also been obtained to reach out to their owners for further investigation.