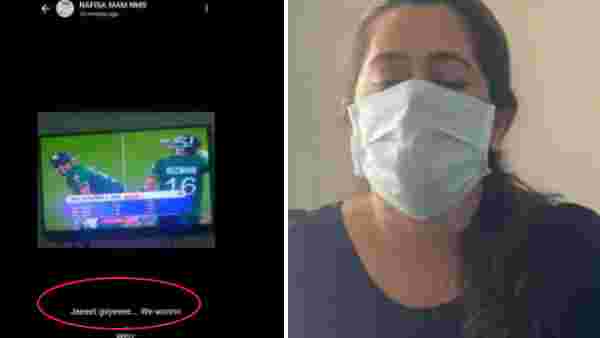 In the ICC T20 World Cup, Team India, had to face defeat in their first match against Pakistan. For the first time in 29 years in a tournament like the World Cup, India has lost against Pakistan, due to which the Indian team is being criticized. At the same time, news of celebrations also came out from many places. There were fireworks in Kashmir, pro-Pakistan slogans were raised in a college in Punjab. Now a similar case has come up from Udaipur in Rajasthan. Nafisa Attari, a teacher at Neerja Modi School, celebrated Pakistan’s victory.

In fact, on October 25, the WhatsApp post of Nafisa Attari, a teacher of Neerja Modi School Udaipur, went viral on the social media platform. In this post, Nafisa Attari shared a picture of Pakistani players, in which it was written, ‘Jeet Gaye, Hum Jeet Gaye’. Nafisa was heavily criticized for this post. Social media users questioned that if she was openly supporting Pakistan, what would she be teaching in her class? However, Nafisa was thrown out of the school only after the post went viral on social media.

Several users have shared a termination letter on social media, which states that Nafisa was terminated from the services. The notice in Hindi reads, “Neerja Modi School teacher Nafisa Attari has been dismissed from the school with immediate effect during the meeting of Sojatia Charitable Trust.” The trust runs the Neerja Modi School. The reason for the dismissal has not been given in the notice.

A video of teacher Nafisa Attari after she was expelled from school went viral on social media. In this video, Nafisa claimed that her post has been taken ‘out of context’. Nafisa said that her family split into two teams during the match and both teams supported both sides. Since her team was supporting Pakistan, she posted the status on WhatsApp. Nafisa said, “Someone in my contact list messaged me and asked that you are supporting Pakistan? I jokingly said yes. I thought it was a joke, because there was an emoji at the end of the message. It does not mean anywhere that I support Pakistan. I am Indian, I love India. I love India as much as you all love. As soon as I realized that the message was going in the wrong way, I deleted the status. If anyone got hurt, I’m very sorry for that.”