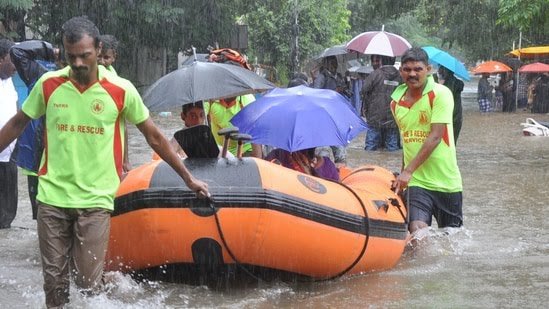 Following a red alert issued by the India Meteorological Department Chennai, Kancheepuram, Tiruvallur, and Ranipet districts for Thursday, the Greater Chennai Corporation has asked the public to stock up on food and necessities and to avoid going near water bodies or low-lying areas. Intense rainfall has begun over coastal Tamil Nadu since early hours of today.

A war room has also been set up at Chennai Corporation where the civic body’s officials are monitoring the red alert situation because of heavy rain.

Chennai, which was battered by heavy downpour last week, was slowly recovering from its impact and another wet spell is likely to affect relief and rescue work.

“Chennai, Tiruvallur, Kancheepuram and Ranipet are expected to receive extremely heavy rainfall as the low-pressure around the coast on Thursday. Ramanathapuram and Thoothukudi districts may receive heavy to very heavy rainfall,” Dr S Balachandran, the deputy director-general of IMD Chennai, told news agency ANI on Wednesday.

Weathermen said that rains could lash isolated areas in Chennai and adjoining districts and 20mm rainfall is expected on Wednesday and Thursday. The Meteorological Department has also reported that there will be squally weather with wind speed reaching 40kmph to 50kmph and could touch 60kmph for the two days.