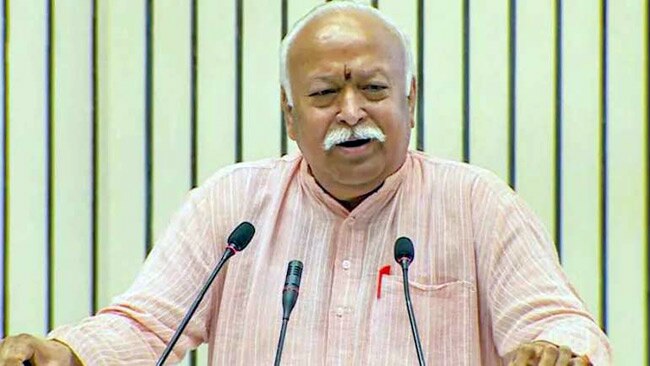 The sarsanghchalak of Rashtriya Swayamsevak Sangh (RSS) Mohan Bhagwat has given a big deal about Hindus and Muslims. He said that the ancestors of Hindus and Muslims were the same and every Indian citizen is a Hindu. Speaking at an event organized by the Global Strategic Policy Foundation in Pune, he said that sensible Muslim leaders should stand firm against extremists.

Mohan Bhagwat said that the minority community in India need not fear anything, because Hindus do not have enmity with anyone. He said, ‘Hindu word is equal to motherland, ancestor and Indian culture. It is not disrespectful to other views. We have to think not of Muslim supremacy, but of Indian supremacy. Everyone should work together for the all-round development of India.

The RSS chief said that sensible Muslim leaders should stand firm against the fundamentalists. He said that the word Hindu is equivalent to motherland, ancestor and Indian culture. This is not disrespectful to other ideas. We have to think not of Muslim supremacy, but of Indian supremacy. Bhagwat said that everyone should work together for the all-round development of India. He said that Islam came with the invaders. This is history and should be told as it is.

Mohan Bhagwat said that sensible Muslim leaders should oppose unnecessary issues and stand firm against fundamentalists and extremists. The sooner we do this, the less harm will be done to the society. The RSS chief said that India as a superpower will not intimidate anyone. The word Hindu is equal to the rich heritage of our motherland, ancestor and culture and every Indian is a Hindu. Earlier in July, Mohan Bhagwat addressed a program organized by the Muslim Rashtriya Manch in Ghaziabad, Uttar Pradesh.