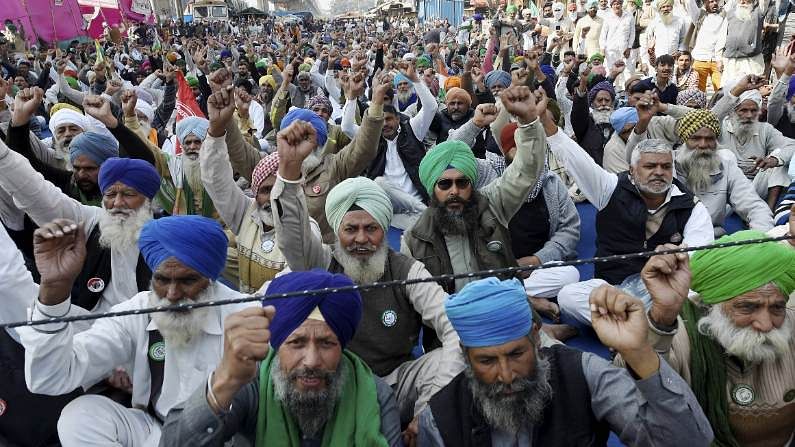 There was a ruckus on Friday morning after a dead body was found on the Singhu border where farmers are protesting. The brutality with which the man was killed near the farmers’ protest site gave everyone goosebumps. Now the Samyukt Kisan Morcha has claimed that Nihang Sikhs are behind this murder. He cut off the hand of that person and took his life. At present, the police has registered an FIR against unknown people. The person killed has been identified.

“The Nihangs said that the incident took place because Lakhbir attempted to commit sacrilege to the ‘Sarbaloh Granth’. It is been reported that this deceased had been staying with the same group of Nihangs for some time,” the statement read.

On the other hand, the Samyukt Kisan Morcha has distanced itself from the Nihang Sikhs and said that it will fully cooperate with the police in the investigation. Apart from this, an emergency meeting has also been called in the morning, in which this incident will be discussed. Seven members of the Coordination Committee of the Samyukt Kisan Morcha will attend the meeting.

“SKM is against sacrilege of any religious text or symbol, but that does not give anyone the right to take the law in their hands. We demand that the culprits be punished according to law,” SKM said.

‘Nihangs are behind this incident. He has accepted this as well. Nihang Sikhs have been creating problems for us from the beginning.

The deceased has been identified as Lakhbir Singh. His father’s name was Darshan Singh but at the age of 6 months, uncle Harnam Singh adopted Lakhbir Singh. Lakhbir Singh was a laborer by profession and his age was 35-36 years. Lakhbir Singh of SC caste was a resident of Cheema Khurd village in Tarn-Taran district.

His parents have died. There is now only one widowed sister (Raj Kaur) in the family. His wife Jaspreet Kaur did not live together. She lives separately with their three children. This includes three daughters. Whose age is between 8 to 12 years.

Also Read – BSF clearifies on jurisdiction change along borders, says it is to bring uniformity across states

The body was hanged from the barricade by cutting off the hand of that person. Initially, the agitators were not even allowing the police to go near the main stage. However, later the Kundli police station brought down the body and brought it to the Civil Hospital. The marks of attack with a sharp weapon have been found on the body of the 35-year-old man. The hand of the youth who was killed has been cut off from the wrist.

The statement of the police has also come on the incident. He said that an FIR has been registered against unknown people. DCP Hansraj said, ‘Kondli, where farmers’ protest is going on at Sonepat border. A dead body was found hanging there at five o’clock in the morning. His hand and leg were chopped off. Who committed the murder, it is not clear at the moment. FIR has been registered against unknown people. A video is also viral, which is being investigated. It is written in the FIR that according to the ASI of Kondli police station on 15-10-2021, he received an information at 5 am that Nihangs cut off the hand of a man in the farmers movement and hanged him with a rope on an iron barricade. In the midst of the peasant movement, on the road towards the Singhu border, one hand and leg of a man had been cut off and hanged, who had died. There were a large number of Nihangs gathered around whom the ASI tried to interrogate, so no one cooperated in the interrogation and neither the dead body was allowed to be removed.

In this case, a case has been registered against unknown people under Section 302/34 of IPC and the FSL team has been informed.