Support Us
More
More
HomeNATIONTerrorist attack: After Srinagar, a policeman martyred in Kulgam, search for the...
NATION
September 17, 2021

Terrorist attack: After Srinagar, a policeman martyred in Kulgam, search for the attackers continues 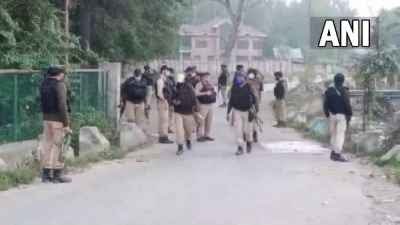 Some unidentified gunmen opened fire on a police party in Kulgam, Jammu and Kashmir this evening. In which a young man was seriously injured. The injured policeman died on the way to the hospital. After the incident, the security forces have cordoned off the area. A search operation is being conducted to find the terrorists. A day earlier, a sub-inspector of Jammu and Kashmir Police was killed by terrorists in Srinagar.

On Friday, some unidentified gunmen ambushed a police patrol party at Wanpoh in Kulgam district and opened fire. A policeman was seriously injured in this firing. Who died on the way to the hospital. The martyr jawan has been identified as Bantu Sharma. As soon as the news of the martyrdom of the son came, there was chaos in the family. The operation is being conducted by cordoning off the area in search of the attackers.

Earlier on Sunday, a terrorist shot a policeman in the middle of the market. Policeman Arshid Ahmed Mir was killed in this terrorist incident in Khanyar area of ​​old Srinagar. The incident was captured in the CCTV camera. Probationary Sub Inspector Arshid Ahmed was shot 2 from behind by the terrorist. He was seriously injured in this. He was immediately rushed to Sher-e-Kashmir Institute of Medical Sciences Hospital in Soura area of ​​Srinagar, where he succumbed to his injuries during treatment.

Shehbaz Badesha Got Sidharth’s Shukla face Tattoo On His Arm

Due to resentment, terrorist organizations have recently changed their strategy. He is planning to carry out hit and run as well as grenade attacks to inflict maximum damage to the security forces. Terrorists are using Over Ground Workers (OGWs) and hybrid terrorists for such incidents, so that even if someone is killed or caught in these attacks, terrorist organizations do not suffer much.

On the other hand, on Friday, security forces recovered a consignment of weapons in South Kashmir’s Pulwama district. This success came during the search operation in Telangam village. A police officer said that two pistols of Pakistan and two of China-made among the recovered weapons. Also, 60 cartridges of nine-mm and 51 cartridges of seven-mm have been recovered. A case has been registered in this regard.