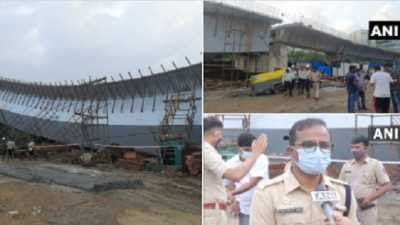 A big news is from Mayanagari, here part of an under-construction flyover at Bandra Kurla Complex collapsed early this morning, injuring 13 people, who have been admitted to a nearby hospital. According to ANI, the incident happened at 4:40 am today. Fire brigade officers and police teams are present on the spot. A search operation is on in view of the possibility of people being trapped under the debris. There is an atmosphere of panic at this time due to the sudden accident.

However, while talking to the media about this, DCP Manjunath Singe said that a part of the under-construction flyover connecting BKC main road and Santacruz-Chembur link road collapsed around 4:30 am today. 13 people have suffered minor injuries and have been admitted to the hospital. There is no casualty and no person is missing. The situation is under control. We are trying to ascertain the cause of the incident.

It is to be known that recently, heavy rains had wreaked havoc in Mumbai. The boy lost his life after the wall collapsed in Bhandup here. Giving information about the accident, the Mumbai Municipal Corporation had said that a 16-year-old boy died in Bhandup due to heavy rains. Apart from this, one person died due to electrocution in Andheri area. Due to the rains, many places were flooded and normal life was disturbed.

Recently, due to rain, there were reports of collapse of old and dilapidated buildings from many areas of Mumbai, although in the places where this accident happened, people had already been instructed, due to which there was loss of life and property.