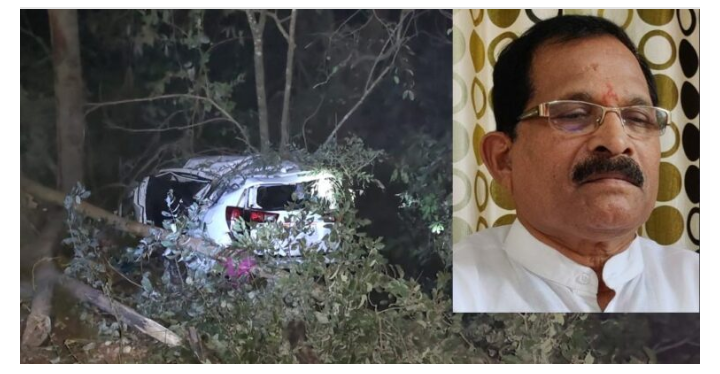 In a tragedic incident, Union Minister Shripad Y Naik met with an accident in Karnataka on Monday.

While minister was injured, his wife Vijaya and personal assistant Deepak, died.

The unfortunate incident happened while the union minister of state for defence, wife and the personal assistant was returning to Goa from Dharmasthala in Karnataka.

The incident took place near Hillur-Hosakambi village in Ankola taluk of Uttar Kannada district on Monday.

The car diverted from the NH-63 to a sub-road, which is a shortcut to Gokarna. The road was not in good condition and suddenly car driver lost control and the car turned upside down.

Naik’s wife Vijaya suffered head injuries and died while being brought to a private hospital in Ankola.

Condition of Naik is stable and has been shifted to Goa Medical College after preliminary treatment in Ankola as per the officials.

Prime Minister Narendra Modi has spoken to Goa Chief Minister Pramod Sawant to ensure proper arrangements for the treatment of Mr Naik in the state. The 68-year-old is a BJP MP from north Goa.

“The death of Vijaya Naik is very unfortunate. May her soul rest in peace and God give strength to her family to overcome their grief,” he said. The Chief Minister wished quick recovery for the Union minister, who also holds charge of the AYUSH ministry.