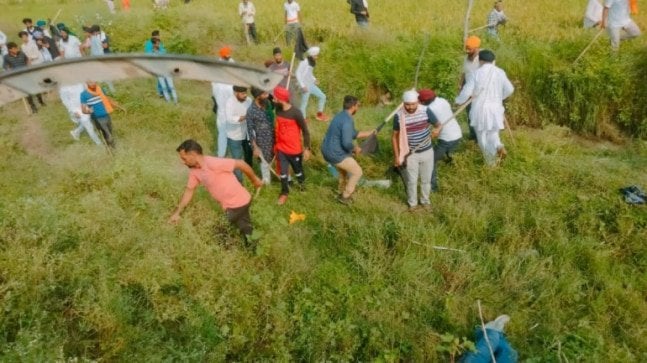 On Sunday in Uttar Pradesh’s Lakhimpur Kheri, Ashish Mishra, the son of Union Minister of State (MoS) for Home Ajay Mishra, was accused of running over protesting farmers with his car. According to the authorities, two farmers died as a result of the incident, which sparked widespread outrage.

Farmers were protesting the Centre’s three agriculture bills ahead of an event at Ajay Mishra’s paternal village in Tikunia, where UP Deputy Chief Minister Keshav Prasad Maurya was scheduled to speak. They intended to present the deputy chief minister with black flags.

Farmers also staged a protest in front of Ashish Mishra’s car as he was leaving to meet Deputy Chief Minister Keshav Prasad Maurya. The Union minister’s son is accused of then driving his car over the protesting farmers. According to the Bhartiya Kisan Union (BKU), not two, but three farmers died in the incident.

Following that, the enraged farmers set fire to three car, including Ashish Mishra’s. Farmers have continued to protest, according to the latest reports, and the situation in Tikunia has become tense.

“In view of the Lakhimpur incident, the entire state has been alerted. All the districts adjoining Lakhimpur have been put on high alert. Instructions have been given to keep a close watch on any type of activity,” DGP Mukul Goyel said to Aaj Tak.

He further informed that an additional police force was also being sent to Lakhimpur Kheri’s Tikunia. “Officials from other districts have also been sent to the spot. IG Range Lucknow Laxmi Singh and ADG Law and Order will camp in Lakhimpur,” the DGP said.