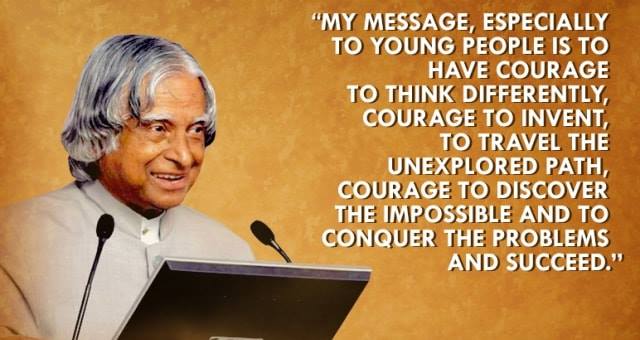 New Delhi: Former president of India, Avul Pakir Jainulabdeen Abdul Kalam was born on October 15, 1931, at Rameshwaram in Tamil Nadu and died on July 27, 2015, due to cardiac attack. Kalam was known as the ‘Missile Man of India’ for his contributions towards the development of India’s missile projects.

While lecturing at the Indian Institute of Management in Shillong, vice president M Venkaiah Naidu and several Union ministers paid tribute to Dr. APJ Abdul Kalam on his sixth death anniversary and remembered him for his contribution to the country.

Naidu tweeted “My humble tributes to former President, Dr APJ Abdul Kalam on his Punya Tithi today. He was a distinguished scientist, a visionary statesman & above all a great human being. His stellar contribution strengthened our defence & space capabilities.”

Piyush Goyal, Union of minister of commerce and industry, also paid tribute to APJ Abdul Kalam. “He ignited our minds and dreamt of India as a developed, innovative and prosperous nation. Let us now realize our country’s brilliant destiny. My humble tribute to the Missile Man, Dr APJ Abdul Kalam on his death anniversary,” Goyal twitter

Hardeep Singh Puri, Union minister of petroleum and natural gas remembered the times he worked with Kalam. “Remembering one of India’s most popular & admired former Presidents Dr APJ Abdul Kalam Ji on his death anniversary. I had the privilege of working with him when he was the Scientific Advisor to RM & I was a JS in MoD. Has always been an inspiration,” tweeted Puri.

Kalam was known as the ‘Missile Man of India’ for his contributions towards the development of India’s missile projects.