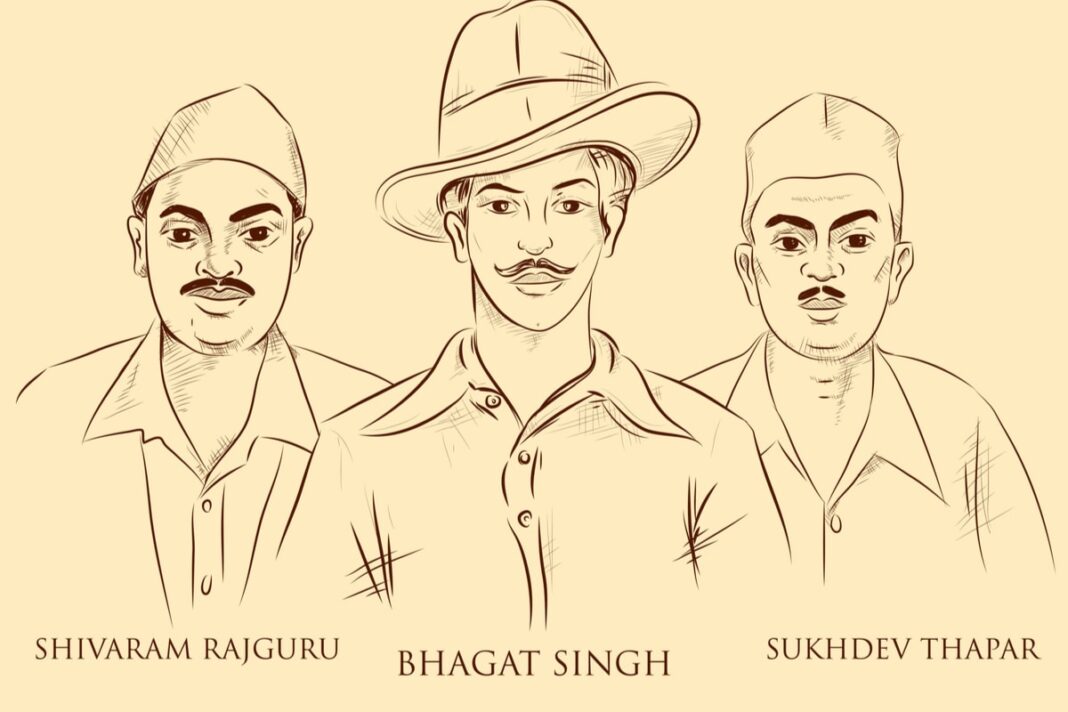 Bhagat Singh, Sukhdev Thapar and Shivram Rajguru – The three great revolutionaries of the Indian freedom struggle were hanged on March 23, 1931 in Hussainiwala (now in Pakistan), Punjab. He was instrumental in the fight against the British Empire and inspired many youths to follow the revolutionary path. Every year 23 March is celebrated as Sacrifice Day or Sarvodaya Day in memory of these brave revolutionaries.

At the age of 23, if anyone smiled just before the execution, he was Bhagat Singh.

Born on 27 September 1907 in Jaranwala (now in Pakistan) in Banga village, Punjab, Bhagat Singh was raised in a freedom fighter family. His uncle Sardar Ajit Singh and his father (Kishan Singh) were great freedom fighters.

The Gadar movement had left a deep impression on his mind. Kartar Singh Sarabha, who was hanged at the young age of 19, had become the hero of Bhagat Singh. The massacre at Jallianwala Bagh on 13 April 1919 prompted Bhagat Singh to go to Amritsar.

On 19 December 1928, Rajguru, along with Bhagat Singh, shot Sanders. On 28 September 1929, Rajguru also tried to kill a governor, the very next day he was arrested from Pune. Rajguru was also prosecuted for his involvement in the ‘Lahore Conspiracy’ case.

Born on 15 May 1907, Sukhdev Thapar witnessed the brutal atrocities that the imperial British Raj had inflicted on the people of India. These scenes forced him to meet with the revolutionaries. As a member of the Hindustan Socialist Republican Association, Sukhdev Thapar organized revolutionary meetings in Punjab and other areas of North India.

On 17 December 1928, Bhagat Singh and Rajguru opened fire on the British officer Sanders to avenge the death of Lala Lajpat Rai. Though he was not in favor of bloodshed, but the British atrocities and anti-labor policies provoked outrage within him. To make the British aware that now the whole of India has been awakened by their atrocities, Bhagat Singh planned to throw a bomb in the Central Assembly. He also wanted that there was no bloodshed.

For this work, Bhagat Singh and Batukeshwar Dutt were selected for this work by the consensus of their team. According to this program, bombs were thrown on 8 April 1929 in the central assembly where no one was present. Bhagat Singh could have run away if he wanted, but he gave his arrest there. Raising the slogan ‘Inquilab-Zindabad’, he threw several leaflets in the air so that his message could reach the people. He wanted to create a system where all relations are based on equality and everyone gets the full right to his hard work.

On October 1929, Bhagat Singh wrote a letter from the jail to the youth of India in which he was given the message that freedom is the right of every human being. These three and their comrades were tortured in jail. The British tortured inhuman torture to break their hunger strike but they failed. Hats off to these revolutionary martyrs who sacrificed their lives at a young age.