CDS Bipin Rawat, Rest In Glory: People restless to know the cause behind chopper crash

CDS Bipin Rawat, Rest In Glory: People restless to know the cause behind chopper crash 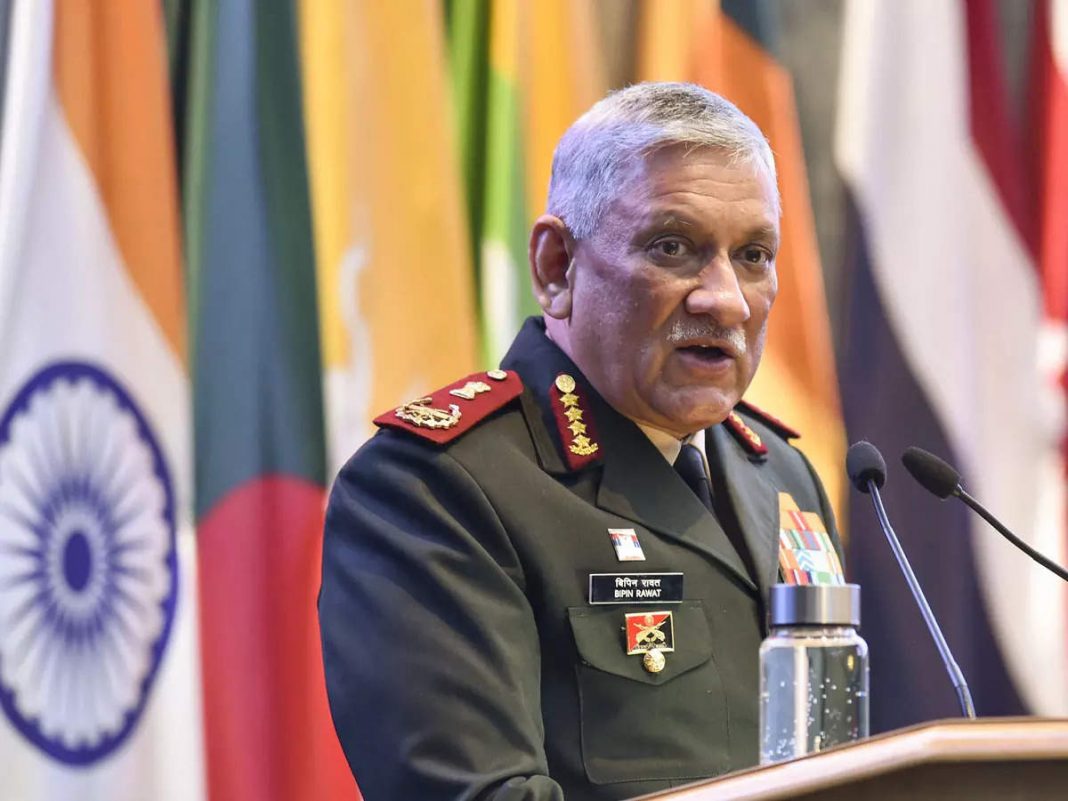 Ramakant Chaudhary | New Delhi: Chief of Defence Staff Bipin Rawat, lovingly called People’s General, wife Madhulika Rawat and his defence assistant Brigadier Lakhwinder Singh Lidder were laid to final rest with full military honour at Brar Square Crematorium, Delhi Cantonment, on December 10. It is difficult to narrate how things unfolded at the crematorium which was full of gloom and doom when young daughters lit the pyres of the departed soul. The bodies of bravehearts were brought to their final resting place in a gun-carriage with flowers and draped with national flags, which passed through the streets of the national capital as part of a solemn procession. Along with military personnel, huge numbers of civilians joined the funeral cavalcade. Wearing their heart on their sleeves, they were shouting “Bipin Rawat Amar Rahe”. The somber atmosphere was ripped apart with slogans of “Bande Matram”. Each tricolour that the civilians were carrying in the hounour for the martyrs proudly witnessed the gravity of sense: “A flag doesn’t fly high because the wind moves it, it flies high with the last breath of each soldier died protecting it.”

It was an incredible scene that appeared during the funeral procession. It was not planned, nor scripted. It was a sudden outburst of feelings coming from all hues that poured out in the streets of the national capital. The people over there might not have met General Rawat ever, nor would have had any kinship with him. It was simply a knee-jerk reaction of patriotism for India and its ‘Senapati’, the Commander of the Indian Armed Force. India’s 130 crore populations have riveted their eyes on television since the heart-wrenching chopper crash happened and burst into flame on Wednesday afternoon when the Mi17V5 chopper in which General Rawat, his wife Madhulika, and 12 others were travelling from Sulur air force station near Coimbatore, and needed seven minutes more to land in Wellington, where the CDS was scheduled to address the faculty and students of Defence Services Staff College. In the tragic incident that shook India, thirteen of the 14 people on board lost their lives while the lone survivor, Group Captain Varun Singh, is battling for life in a military hospital in Bangalore.

Mandated as Chief of Defence Staff for the first time since Independence, Bipin Rawat was in true sense the People’s General and known for his unswerving ability to deliver on the daunting task. He was entrusted with many responsibilities vis-a-vis Integrated Theatre Commands, streamlining repetitive and wasteful defence expenditure, generating self-sufficiency in weapon manufacture and preparing a new generation of modern Indian Armed Force. The mortal remains were consigned to the flame but its every spark is questioning now: what is the exact cause behind the chopper crash? Every Indian, who always loves to worship his patriotism to the hilt, asks this question. Their right to know the answer must be underlined.

The visual of the viral video clearly showed the ill-fated Mi 17 helicopter seemed to be going smoothly and suddenly disappeared amidst mist. It is intriguing that during the last 7-8 minutes talk between the CDS chopper and the Air Traffic Control no distress call was made, rather it was announced a descent landing. If this report is true then why did this tragic incident take place? Images indicate that the helicopter was flying low and struck trees. Then, what were compulsions that made the copter duck down below clouds? The weather forecast for the hilly areas indicated low clouds and light rains. If it is true then who allowed the pilot to fly the Mi 17 helicopter? Was the pilot under pressure to proceed? According to experts, the M-17 has very powerful engines and is fitted with modern avionics. It is one of the most advanced transport helicopters in the world. Then how come such a reliant helicopter could not sustain the inclement weather or could have suddenly had some serious technical snags that expert pilots could not make out? Despite all precautionary measures and meticulous observation put in place during such VVIP movement, if such an incident happens, it gives many doubts. Are any foreign hands behind such an incident?

Rajya Sabha MP Subramanian Swamy termed the incident as “shocking” and a big caution to national security. He said, “It is something that requires very very serious investigation….the public has to be taken into confidence, so somebody, a senior Supreme Court Judge, should investigate the matter.” The bereft family members of Havildar Satpal Rai, posted as PSO to General Rawat and onboard the ill-fated flight, are shell-shocked that how the helicopter carrying such VVIPs could meet such a fatal incident? India wants a proper investigation to know what caused this tragic copter crash. The tragic helicopter crash of General Rawat is another addition to the long list of fatal accidents involving VVIPs. Courts of inquiries were set earlier also but nothing concrete came out or it seems that no lesson was learnt from past mistakes of chopper crashes. This time also a high-grade committee has been set up to probe into the M 17 crash. Will the truth come out or will it be buried in government files in the name of defence secrecy as it was done clandestinely during the previous investigations? Puchhata Hai Bharat (India asks for it).

(Ramakant Chaudhary is Consulting Editor with Daily News Post. He has worked with The Times of India, Hindustan Times (Mint), Dainik Jagran Group, The Pioneer and The Political and Business Daily. The views expressed are personal.)