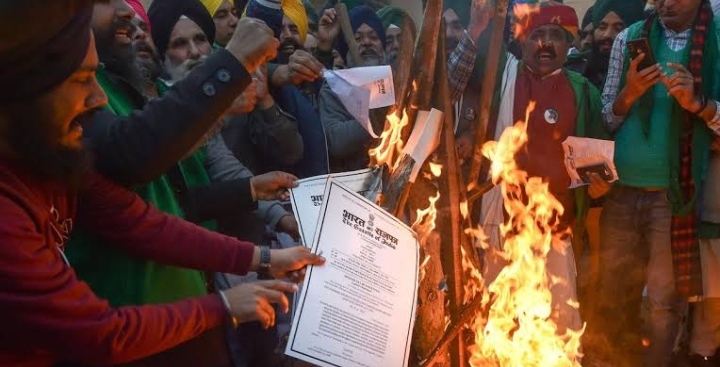 Farmers protesting for nearly 50 days on the borders of Delhi celebrated Lohri by burning copies of three farm laws .

Paramjit Singh of United Kisan Morcha said that one lakh copies of agricultural laws were burnt on the Singhu border alone.

Gurpreet Singh Sandhu, a farmer from Haryana who participated in the demonstration, said, the festivities can wait. The day the Center accepts our demand to withdraw these black laws, we will celebrate all the festivals on the same day.

Farmers of Punjab also expressed their opposition to these laws by burning copies of three farm laws. The farmers also raised slogans against the BJP-led central government for not accepting their demands. They also demanded the repeal of new agricultural laws.

Farmer leader Darshan Pal Singh said, “We have sent a message to the government by burning copies of 3 laws that in the same way, these bills will one day get angry with us and the government will have to withdraw the law.” He said, on 18th, women will protest in markets across the country, in SDM offices, district headquarters.

The farmers said that in a day or two, this strike of Mewat will become huge like the Indus border. Thousands of farmers will come from Rajasthan in tractor-trolleys. The government is dogged under pressure from industrialists. The farmers did not demand the laws, so why is the government forcibly imposing these laws. He said that till the withdrawal of the three laws, they will stand on the front and make the farmers of the area aware. He warned the Central and Haryana Government not to take patience for the farmers.

He said that for one and a half months, farmers have been agitating around Delhi and now sitting in Mewat, but the government is determined to be arbitrary.