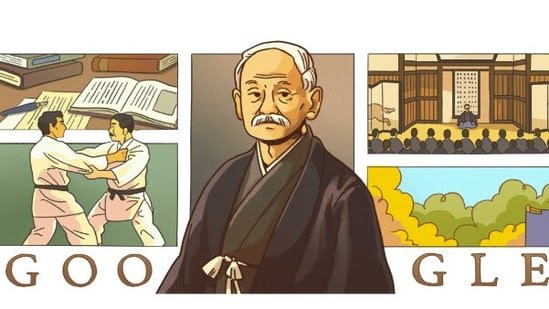 On Thursday Google Doodle celebrated birthday of “Father of Judo” Professor Kano Jigoro who formalised the martial art as a sports that brings together people on principles of justice, courtesy, safety and modesty, even while throwing opponents to the mat sometimes.

The Google Doodle on Professor Kano Jigoro’s birthday on October 28 has multiple slides and is animated to show the Judo progenitor’s life and work in a series of pictures where professor can be seen teaching his students the value of humility and hard work while mastering the martial art.

Bore in 1860 in Mikage, Kano Jigoro moved to Tokyo with his father at the age of 11. he was known as a child prodigy in school and determined to study the martial art of Jujutsu. During his time as a student at Tokyo University, he finally found someone who would teach him-Jujutsu master and former samurai Fukuda Hachinosuke.

Judo was first born during a Jujutsu sparring match when Kano incorporated a western wrestling move to bring his much larger opponent to the mat. By removing the most dangerous techniques used in Jujutsu, he created “Judo,” a safe and cooperative sport based on Kano’s personal philosophy of Seiryoku-Zenyo (maximum efficient use of energy) and Jita-Kyoei (mutual prosperity of self and others).

Have a look at today’s Google Doodle: