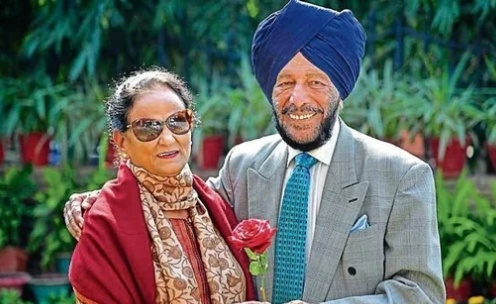 Nirmal Kaur wife Flying Sikh Milkha Singh breathed her last at Fortis hospital in Mohali on sunday. She was battling to deadly virus Covid-19 almost three weeks. She was 85. Former captain of the Indian women’s volleyball team, Nirmal’s health deteriorated a few days after she was admitted to the hospital.

There was a drop in her oxygen level owing to Covid-19 and she was put on HFNC (high flow nasal cannula) and NIV (non-invasive ventilator) intermittently since then.

She was stable but her condition had not improved. She was admitted to the hospital in last week of May after she had developed Covid-19 pneumonia. At that time, 91-year-old Milkha was also admitted at the same Mohali hospital.

When Milkha’s health improved, on his family’s insistence, he was sent home, however, ailing Nirmal stayed back for further treatment. Their son and India’s ace golfer along with sister doctor Mona had been co-ordinating with the doctors in the hospital.

Nirmal Kaur is survived by his husband, one son and three daughters.

“We are deeply saddened to inform you that Mrs Nirmal Milkha Singh passed away after a valiant battle against COVID at 4 PM today,” a statement from the spokesperson of the Milkha family said.

“A back bone of the Milkha Family, she was 85 years old. It is tragic that the Flying Sikh Milkha Singh ji could not attend the cremation which was conducted this evening itself as he is still in the ICU (of PGIMER in Chandigarh) himself.”

”The family has expressed its grateful thanks to everyone for their solidarity and prayers right through the battle which gave them the strength to face it bravely.” PTI