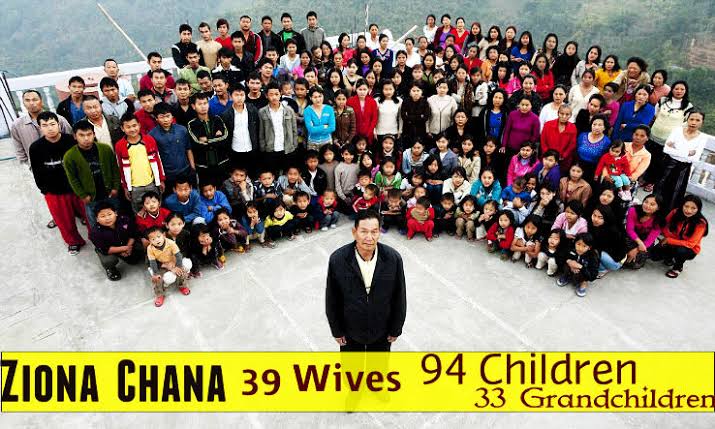 Ziona Chana, believed to head the world’s largest family — with 38 wives, 89 children and 33 grandchildren — died today at the age of 76 in Mizoram.

Members of his family said he had been suffering from diabetes and high blood pressure. He was unable to eat since June 7 and went into a coma on June 11.

Doctors from Aizawl went to his village Baktawng Tlangnuam, about 100 km from Aizawl. Since he was unconscious, the doctors suggested that he should be admitted to a hospital and put on the intensive care unit. An ambulance sent from Aizawl brought him to the Trinity Hospital at 2:50 pm on Sunday but he died a few minutes later.

The chief minister said his village in Baktawng Tlangnuam had become a tourist attraction in the state because of Chana and his family.

“With heavy heart, #Mizoram bid farewell to Mr. Zion-a (76), believed to head the world’s largest family, with 38 wives and 89 children. Mizoram and his village at Baktawng Tlangnuam has become a major tourist attraction in the state because of the family. Rest in Peace Sir!,” the chief minister tweeted.