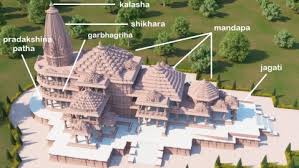 This information has been given by the treasurer of the trust which is overseeing the project. He told that this much money is also being arranged. For this, the trust is aiming to collect donations from 11 crore families of the country and the world.

Swami Govind Dev Giriji Maharaj, treasurer of Shriram Janmabhoomi Tirtha Kshetra Trust said that the infrastructure experts and engineers are making plans for the foundation stone of the temple. He said in the press conference here that the construction of the main structure of the Ram temple is estimated to cost Rs 300 to 400 crore, while the construction of the entire complex will not cost less than Rs 1,100 crore. He also said that all this is only assessment.

Giriji Maharaj said that the construction of the temple has started and experts from IIT Bombay, Delhi, Madras, Guwahati and experts from Central Building Research Institute, Roorkee and engineers from L&T and Tata group are planning a strong base of the campus.

The Trust has announced a massive campaign to raise contacts and funds for the construction of the temple. Vidarbha Regional Office was started a few days ago to raise funds.