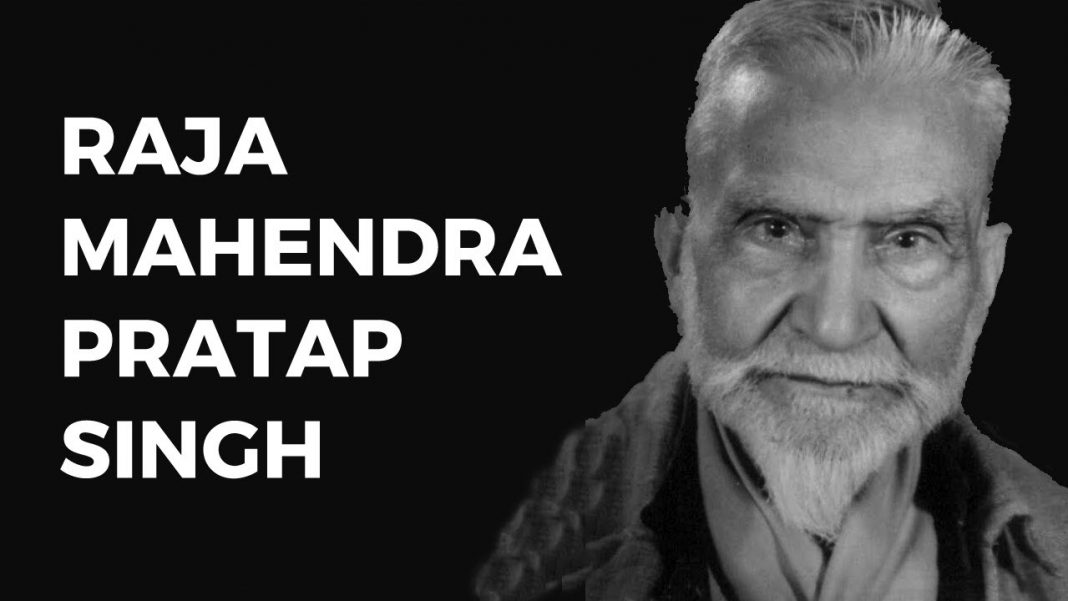 Born on 1 December 1886, Mahendra Pratap Singh was the king of Mursan princely state of Hathras in western Uttar Pradesh. Raja Mahendra Pratap Singh, who belonged to the Jat family, was counted among the educated people of his area. He was married to Balbir Kaur of the princely state of Jind. For his procession, two special trains were run between Hathras and Sangrur.

Raja Mahendra Pratap Singh had traveled to more than 50 countries. Despite this, he did not have an Indian passport. He formed the first Indian government in exile on 1 December 1915 with the support of the Afghan government. He lived abroad for 31 years and eight months, sounding the trumpet of independence. This was the first attempt outside the country to liberate India. It was not possible to get a passport from the British government. He had a passport of the Government of Afghanistan.

Dr. who edited Raja Mahendra Pratap’s autobiography ‘My Life Story’ According to Veer , Raja Mahendra Pratap Singh had tried to get a passport made through the DM office of Dehradun before leaving India, but an article in support of Germany in a newspaper created a hurdle in making the passport. After this, Raja Mahendra Pratap Singh made a plan to reach Britain by sea. Later he traveled to countries like Switzerland, Germany, Soviet Union, Japan, China, Afghanistan, Iran, Turkey. In 1946, he was able to return to India under conditions.

In the general elections of 1957, Raja Mahendra Pratap defeated Atal Bihari Vajpayee. Raja Mahendra Pratap Singh contested from Mathura Lok Sabha seat in this election. There were about 4 lakh 23 thousand 432 voters in this election. Of these, 55 percent i.e. about 2 lakh 34 thousand 190 people had exercised their franchise. At that time getting 55 percent votes was a big deal.

Raja Mahendra Pratap Singh, an independent candidate who won in this election, had even forfeited the bail of Bharatiya Jana Sangh Party candidate Atal Bihari Vajpayee. As per rules, the security deposit is forfeited if 1/6th of the total votes is not received. Atal Bihari Vajpayee got less than 1/6 of the votes in this election, while Raja Mahendra Pratap got the maximum votes and won. After this, Raja contested from the Aligarh parliamentary constituency, in which he had to face tremendous public opposition.

This land is separate from the main campus towards the city where today half of the city school is running and half of it is vacant. When asked about how the contribution of Raja Mahendra Pratap Singh has been preserved in the university campus, Umar Peerzada said, “We have got a big picture of him in the Central Library, Maulana Azad Library, we have written many books on him. Specially organized and from time to time there are seminars and seminars in his honor Seminars are being held.The Samadhi of Raja Mahendra Pratap Singh, located in Vrindavan, Mathura, the neighbouring district of Aligarh, is shedding tears over his plight.

Raja Mahendra Pratap Singh, who made an unprecedented contribution in the field of education, built an inter college named Prem Mahavidyalaya on his land in Vrindavan. This college has been a witness to the freedom struggle. In front of it is his samadhi situated on the banks of Yamuna, which is now in a dilapidated condition.

The people here have raised the demand to develop his samadhi site as Vishwaghat. Principal of Prem Mahavidyalaya Dr Dev Prakash Sharma has expressed concern over the plight of King Mahendra Pratap’s Samadhi in Vrindavan. He said that Prime Minister Narendra Modi is coming to Aligarh to lay the foundation stone of a state university to be built in the name of Raja Mahendra Pratap. .But no one is paying attention to the tomb of Raja Saheb in Vrindavan. They have also raised the demand of Bharat Ratna for Raja Saheb