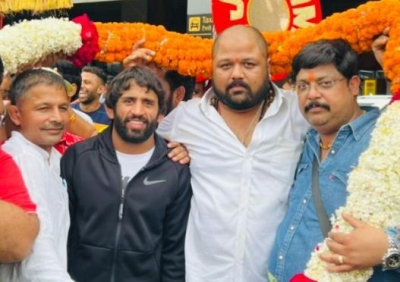 Star Wrestler Bajrang Punia was given a rousing welcome on his arrival at the Indira Gandhi International Airport on Tuesday. Powerlifter Gaurav Sharma felicitated the Commonwealth and Asian Games gold medallist and Olympic bronze winner.

“Bajrang has made India proud yet again and he will continue to do so. Despite getting injured, he won a bronze medal for the nation. I am sure he will win gold in the Olympics (Paris 2024) as well. We have come to welcome our national hero, of whom every single Indian is proud,” Gaurav said.

Bajrang claimed the bronze medal in the men’s 65kg on the final day of the World Wrestling Championships 2022, on September 18. The Haryana grappler — who was wrestling with a bandage on his head due to the injury he sustained during his pre-quarter-final — produced a spirited fightback against Puerto Rico’s Sebastian Rivera, after being 6-0 down early in the bout.

The 28-year-old eventually cut the lead and was trailing 8-9 heading into the last minute of the second period. The Tokyo 2020 bronze medallist then pulled off a two-point takedown in the final 20 seconds to turn the tables and win the bout 10-9.