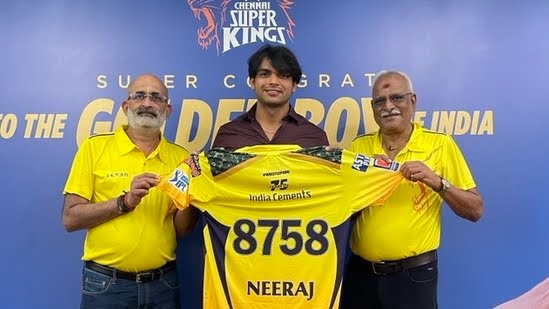 Chennai Super Kings have rewarded Rs 1 crore to Neeraj Chopra for his gold medal win at the Tokyo Olympics earlier this year.

CSK also presented a special jersey with the number 8758 (highlighting Chopra’s medal-winning effort of 87.58 metres) as a mark of respect to the javelin thrower.

“The entire nation is proud of Neeraj for his stupendous achievement. By becoming the first Indian to win a medal (gold) in the track and field, he has set a benchmark and is an inspiration for the next generation. 87.58 is a number that will forever be etched in Indian sporting history and it’s an honour for us to present this special jersey to Neeraj. We wish he brings more glory to the nation,” said CSK CEO KS Viswanathan.

“The one with the Golden boy @Neeraj_chopra1 !Super happy to hand our Yellow heart to the arms that made us proud!” wrote CSK on twitter.

Chopra after receiving the award and special jersey stated that last two months have been an opportunity for him to experience new things and also thanked the Chennai Super Kings management for the support.

“Thank you so much for your support and for the prize. It feels good. The last two months have been hectic and an opportunity to experience new things. I never thought that I’ll get so much love after winning gold. It was completely unexpected and it feels good. Hopefully I’ll work hard and get good results,” said Chopra.