Deepak Chahar: My batting will inspire top-order batsmen to do well 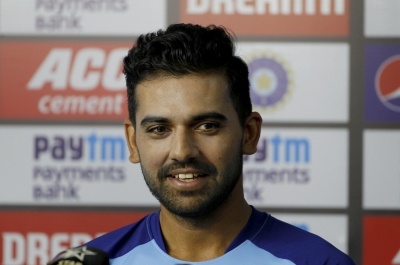 India pace bowler Deepak Chahar who scored 69 runs to help India to win the second One Day International against Sri Lanka said that he is not too concerned about the tag of all-rounder for his selection in the upcoming T20 World Cup but remains focussed on improving his batting and taking chases down to the last over.

“Whether people consider me an all-rounder or not, it doesn’t matter. But the batsman playing in front of me, he should have the confidence that I can support him. If I bat in a situation like this (in second ODI when India needed 83 with four wickets in hand) again, then it is very important [for top-order batsmen] to know that this batsman can help me and win the match,” said Chahar to the media during a virtual interaction on the eve of the third ODI.

“I work hard on batting. My father is my coach. Whenever I talk to him, like if I am talking to him for 10 minutes, I talk to him for 6-7 minutes about batting,” added Chahar.

The 28-year-old, who has represented India in five ODIs and 13 T20Is said that he likes to stick to the basics and play as straight as possible.

“I always believe that basics are most important. If your basics are correct then you will do well,” said Chahar.

“Like, if you want to become a swing bowler, your seam is most important. If the ball doesn’t fall on seam, it can’t move. Same thing with batting, you have to play straight. The broader the bat, the more chances you have to hit the ball. Those are basic things,” he said further.

“He has had a great impact not just in CSK. I have been seeing him from childhood and learning how to take matches close. Whenever I talk to him, he always tells us, that we have to take the game till the end…. We are here to entertain people. If the game goes into the last few overs, it becomes thrilling and people get entertained,” the right-arm bowler said further.

The fast bowler also made it clear that he is not focused on selection in the T20 World Cup in the United Arab Emirates.

“It (T20 World Cup) is very far off. Selection is not in our hands. Only our performance is in our hands. I was fortunate enough that I got a chance to improve my batting. I have been searching for opportunities to bat well. I haven’t been getting enough batting over the past two years. Whenever I got a chance [in the last 2-3 years], I faced only one or two balls. I had a great opportunity to improve myself in batting. I am happy I could convert it [in the second ODI].”

Chahar added that he has benefitted a lot from Rahul Dravid, who is the coach of the limited-overs team in Sri Lanka.

“Great experience. Though this is the first Indian tour with Rahul [Dravid] sir but I have toured with India A under him. We have had 3-4 times such situations there in India A… you benefit if the coach backs you because at the back of your mind, you always know that you have some support.”