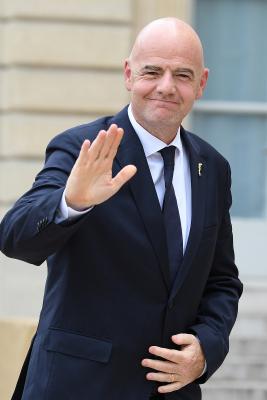 Gianni Infantino, the President of football governing body FIFA may travel to India in the last week of October to call upon Prime Minister Narendra Modi to discuss the way forward for Indian football, the AIL India Football Association (AIFF) said in a release on Monday.

During the Executive Committee meeting of AIFF held here on, the members were informed about the development.

The newly-elected president of AIFF, Kalyan Chaubey opened the proceedings by informing the Executive Committee about the development and talks with the Government of India and the Qatar Football Association.

On the matter of the National Awards, the Committee recommended that Arun Ghosh, Shabbir Ali and I.M Vijayan be nominated for the Padma Shri, Manoranjan Bhattacharya for the Major Dhyan Chand Award, and Jeje Lalpekhlua for the Arjuna Award.

After chairing the executive committee meeting, Chaubey said, “The Government is going to lend large-scale support to help popularise football. We have plans to have U-17 Women’s Football events across 30 cities, where young girls can play and learn about the sport. It is our hope that such initiatives will further help inspire more young kids to take up the beautiful game.”

“We have also had fruitful talks with the Qatar Football Association, and they are going to help us in various areas with respect to the development of football in India,” he said.

The Technical Committee’s recommendations to use Indian coaches in all age groups, to discontinue the Indian Arrows project and replace it with the Elite Youth League, and to appoint more female coaches for the Women’s National Teams, were also endorsed by the Executive Committee.

The 34 State FAs have submitted proposals for their respective State Development projects, something that the State Development Committee will duly look into. Additionally, all state FAs have been asked to propose the name of an eminent footballer from their respective state for appointing them as the brand ambassador of each State FA. The nominations of the proposed eminent footballers as the brand ambassadors will be made by the Technical Committee.

A three-member committee headed by vice-president N.A Haris has been formed to look into the various aspects of the National Centre of Excellence in Kolkata and submit a report on how to take the project forward for the optimum use of the National Teams.