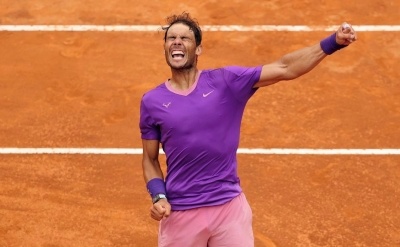 Tennis ace Rafael Nadal has advanced to his 14th French Open final in dramatic circumstances when a serious ankle injury to Alexander Zverev halted their exciting battle on the eve of a second-set tie-break, in a match that had already lasted more than three hours, here on Friday.

Under the roof on Court Philippe Chatrier, one of the matches of the season was cut short at 7-6(8), 6-6, when the German had to leave the court in a wheelchair after he badly rolled his right ankle, moving to his right when tracking down a Nadal forehand deep behind the baseline.

“Very tough and very sad for him. Honestly, he was playing an unbelievable tournament. He’s a very good colleague on the Tour. I know how much he’s fighting to win a Grand Slam, but for the moment he was very unlucky” said Nadal on-court after the match.

“The only thing I’m sure of is that he is going to win not one more than one. I wish him all the best and very fast recovery,” he added.