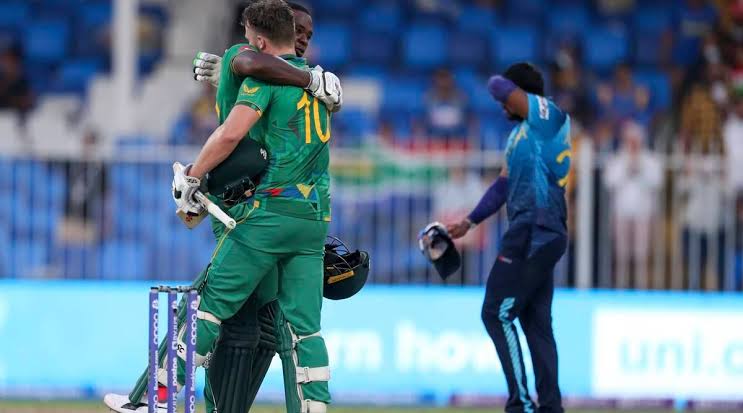 South Africa beat Sri Lanka in a thriller at Sharjah Cricket Stadium on Saturday. South Africa needed 16 runs in the final over where David Miller hit two consecutive sixes to guide his team to their second victory of the tournament.

Earlier while batting first, Sri Lanka put up 142 runs on the board with superb batting display from opener Pathum Nissanka who ended up scoring 72 runs. Tabraiz Shamsi was the best bowler as he returned with the figures of 3/17 in his four overs quota.

Chasing 143, South Africa lost openers Reeza Hendricks and Quinton de Kock in the fourth over by Dushmantha Chameera. While Hendricks was rapped on the back pad, de Kock got a top edge on the pull, pouched by the bowler himself.

Sri Lanka leg-spinner Wanindu Hasaranga got a hat-trick in the match and at a time South Africa were totally out of the contest but later the late cameos from David Miller ans Kagiso Rabada helped them in sealing another victory in the tournament.