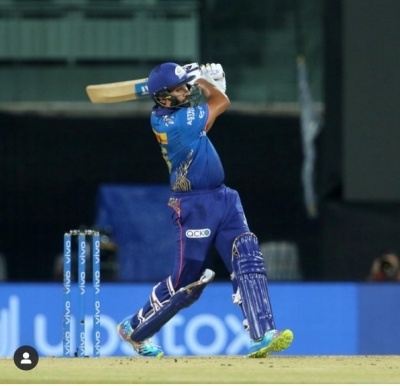 A day after Mumbai Indians lost their eighth consecutive game in the ongoing Indian Premier League, skipper Rohit Sharma has penned down an emotional message on Twitter.

Mumbai skipper also thanked the well-wishers of the team for showing their loyalty during this tough phase.

“We haven’t put our best foot forward in this tournament but that happens, many sporting giants have gone through this phase but I love this team and its environment. Also want to appreciate our well wishers who’ve shown faith and undying loyalty to this team so far,” Rohit wrote on Twitter.

Record five-time champions Mumbai Indians are enduring their worst run in IPL history and skipper Rohit, who himself has also not been at his best, feels that in the manner in which they are losing games, everyone in the bench is in contention.

“Everyone has come into discussion given how our tournament has gone. We need to ensure that we have a settled team and give players in the middle a fair chance,” he said when asked if there is a chance for Tim David to come into the equation, after the loss against Lucknow.

“Their roles are different when they play for their countries and here we expect something else from them. We tried not to make too many changes, and we have tried to play the best combination possible. But when you lose games, you always have such discussions. As far as I am concerned, I want to give people enough chances to prove themselves. The season hasn’t gone the way we would have wanted it to, but such things happen,” he concluded.