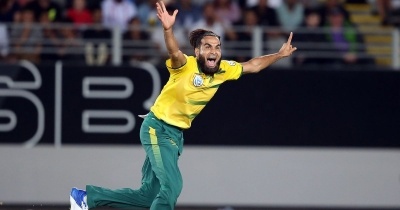 He stated since Mark Boucher became the head coach, there was no communication with him on plans T20 World Cup.

Tahir’s omissions was one of the big alongside Faf du Plessis and Chris Morris.

“I am not feeling great that I am not in the squad. Last year Graeme Smith spoke to me and said I want you to play in the World Cup, which was in Australia. I said obviously I am available and excited and honoured because you give me respect. I am ready,” said Tahir in an interview to IOL Sport on Friday.

“I am working hard and you can see my performances in all these leagues. He said that’s why he wants me. He also said he was going to speak to a few other guys like AB (de Villiers) and Faf (du Plessis). They put me on the Proteas group and everything, but then nobody contacted me,” added Tahir.

“After a few months I texted Smith and Boucher and nobody replied to me. Since Boucher has become coach, he has not contacted me once to tell me what his plans are. It’s really sad man. I served the country for 10 years. I think I deserve a little more respect than these guys thinking I’m worthless.”

“I spoke to Temba and he said he has a meeting with Boucher the following week. Temba came back to me with a message from Boucher that I must speak to Victor. I again tried to reach him (Mpitsang) and he tried to call me on my WhatsApp number. But he didn’t realise WhatsApp doesn’t work in Dubai. Victor eventually spoke to me and said he will let me know. But then after a couple of months again I heard nothing.”

Tahir made it clear that he has no plans to retire as of now from international cricket.

“I have always wanted to win a World Cup for South Africa to say thank you for the opportunity this country has given me, so I am not planning on retiring. I am going to play until 50 if I have to,” concluded Tahir.