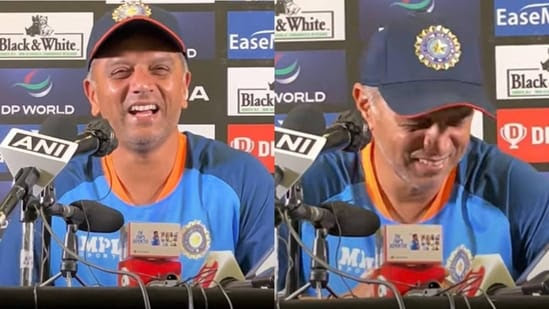 India head coach Rahul Dravid has shown the witty and funny side of his personality as well which has often left the media room bursting into laughter. On the eve of the match between India and Pakistan in the Super 4 stage of the ongoing Asia Cup 2022, coach was asked to compare the bowling line-ups of the two teams and his response was hilarious.

Apparently, the Indian head coach was trying to describe the Indian bowlers as not as “sexy” as the Pakistani bowlers but were effective nonetheless. Although Dravid did not use the word himself, the reporters present there understood what he was trying to convey and burst into laughter. The Indian coach suggested that his bowlers might not have the same amount of pace as their counterparts, but they are effective, and that is what matters.

“I wanted to use the word, but I can’t use that word, the word in my mind is coming out of my mouth, but I can’t use it. The point I’m trying to make is… it is a four-letter word that starts with ‘S’, but ok. We might not look glamorous, but we have got the guys who produce results,” Rahul Dravid said during his presser.

India are set to take on Pakistan in their first match of the Super 4 of the ongoing Asia Cup 2022 on Sunday.