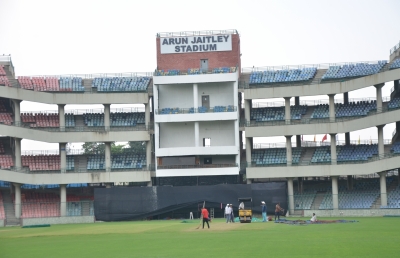 With the Board of Control for cricket in India (BCCI) allowing full-capacity in stadium for India-South Africa T20I series, Delhi and District Cricket Association (DDCA) president Rohan Jaitley is leaving no stone left unturned in the organising the mega comeback for fans.

Another major development is that player from both the team will not stay in the bio-bubble and this is also the first time since COVID-19 came in.

The DDCA president said the upcoming first T20I is very close to his heart and asserted that adequate measures will be taken to stage the game successfully.

“It is very close to my heart, after the renaming (from the Feroz Shah Kotla to Arun Jaitley) of the stadium there were few games and after that, we were hit by the pandemic. We have to make sure perfect facilities and infrastructure is provided for hosting the game,” Rohan Jaitley told IANS.

“All appropriate guidelines are being followed, even if no restrictions are there we will make sure masking is followed by the spectators. It is better to be cautious. The stadium is per se ready to host the match and we are excited to welcome fans,” he added.

“Last 30 months have been a difficult period for the cricket fraternity and the society due to the pandemic. We are now seeing spectators returning back, restrictions being lifted,” the DDCA president said.

“For the first T20I, we are expecting a larger number of spectators. The South African team has already arrived and they are getting acclimatised to the weather. It is an interesting phase for Delhi cricket as many new stances have been opened up,” he added.

The five-match series will start from June 9 and will conclude on June 19.