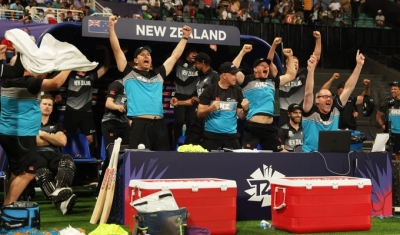 New Zealand all-rounder James Neesham played a match-changing knock against England to take his team in the T20 World Cup final for the first time. Chasing the target of 167, New Zealand won the game in the 19th over with superb knock from opener Daryl Mitchell.

In a recent picture that has gone viral on social media, New Zealand players were seen jumping and celebrating the win after Daryl Mitchell smashed the winning boundary.

Many social media users were left confused. Quoting a tweet from ESPNCricinfo, Neesham wrote. “Job finished? I don’t think so.” After heartbreak of being second best in the 2019 Cricket World Cup final at Lord’s, looks like Neesham is dead set to take New Zealand past the finishing line in Dubai on Sunday.